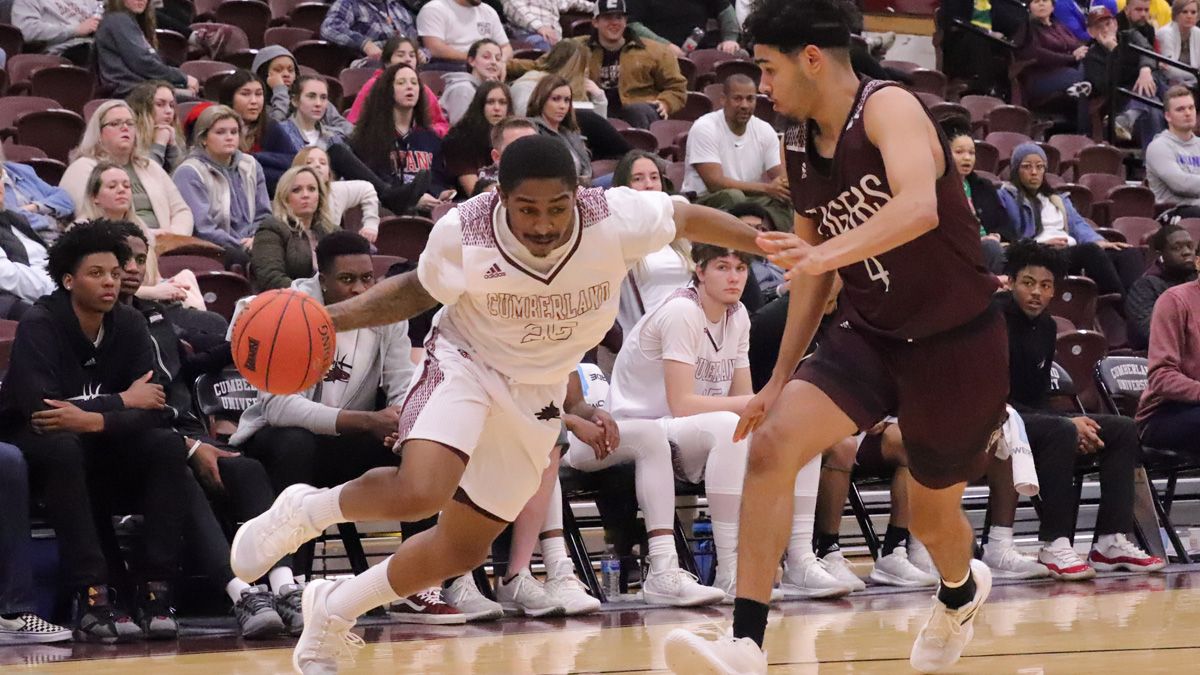 MARIETTA, Ga. – Connor Gamble’s jumper with 41.5 seconds remaining put Life University ahead for good and Evan Milligan netted 3-of-4 free throws in the final 19 seconds, as the Running Eagles outscored Cumberland, 9-1, in the final three minutes in a 73-69 victory in men’s basketball action here Thursday night at The Eagles’ Nest.

Cumberland (10-14, 2-11 Mid-South) trailed by seven early in the second half but battled back to take the lead. Tranard Chester’s 3-pointer with 3:18 remaining put the Phoenix ahead, 68-64, with 3:18 remaining, but CU was unable to score the rest of the way, missing three shots with one turnover.

Milligan’s basket with 2:45 to play cut the lead to two and Demetrius Houston knotted the contest at 68 with a baseline field goal with 1:23 remaining. Cumberland turned the ball over on the other end of Gamble, who made 6-of-10 shots with five 3-pointers in the contest, hit a 17-footer off a curl with 41.5 seconds on the clock for a 70-68 Life edge.

Andrew Rogan was fouled with 21.3 seconds remaining and made the front end of the 1-plus-1, but the second foul shot rimmed out. Milligan hit both ends of the 1-plus-1 with 18.6 seconds to play for a three-point Life advantage.

Cumberland had one last chance but Brandon Levier’s 3-pointer was no good. Milligan added one more foul shot with 0.3 seconds on the clock for the final score.

The Phoenix led by four at the half but an old-fashioned 3-point play by Houston and a layup from Jay Jay Simpson tied the contest at 46. Shamari Denson hit a 3-pointer for Asher Blum got a bucket for a four-point CU edge, but Gamble drilled a pair of triples around a putback for Milligan for a 55-51 Life advantage.

Milligan got two more buckets underneath and hit a free throw for a seven-point Running Eagles lead with 11:33 remaining. The lead was still seven three minutes later before an old-fashioned 3-point play from Blum and Chester’s layup cut the deficit to one.

Levier’s two free throws with just over five minutes remaining gave Cumberland the lead and Chester drilled the 3-pointer for a four-point advantage with 3:18 to go, but Life pulled out the victory with the final sequence.

Rogan netted 12 of his 17 points in the first half while Chester and Denson each finished with 13 and Blum added 11. Chester grabbed eight rebounds and Rogan had seven as well for the undersized Phoenix.

Milligan collected 14 of his 23 points in the second half for Life. Gamble posted 17 points, Houston netted 12 and Cam Horton recorded 10 off the bench. Milligan registered a game-high 10 boards.

Cumberland netted nine straight points for a 9-4 advantage early in the contest, including short jumpers from Heath Starkey and Levier along with a layup and an old-fashioned 3-point play by Rogan.

After the Running Eagles tied the game at nine, the Phoenix posted eight straight points with another layup by Rogan and a putback from Starkey. Chester hit a mid-range jumper and Levier picked up a loose ball for a layup for a 17-9 lead with 12:24 left in the opening half.

Gamble’s deep 3-pointer for Life cut the CU advantage to four but Rogan answered with a three for the Phoenix and Denson hit the first of two triples from the right corner, stretching the CU lead to 29-19.

Starkey drilled a 3-pointer from the top of the key and Denson’s second three increased the advantage to 35-23 with 5:54 to play in the period. Rogan and Starkey each picked up their second fouls on consecutive possessions for the Running Eagles, who ended the half with a 14-6 spurt.

Simpson drilled a 3-pointer from the corner and Milligan scored twice underneath during the run. Simpson’s runner in the final 10 seconds cut the Cumberland lead to 41-37 at intermission.

Cumberland finishes the regular season at home Saturday with a 4 p.m. tip-off against the University of the Cumberlands.