#21 Univ. of Cumberlands at Cumberland University | February 23, 2019
BoxscorePlay-by-Play1st Half2nd Half 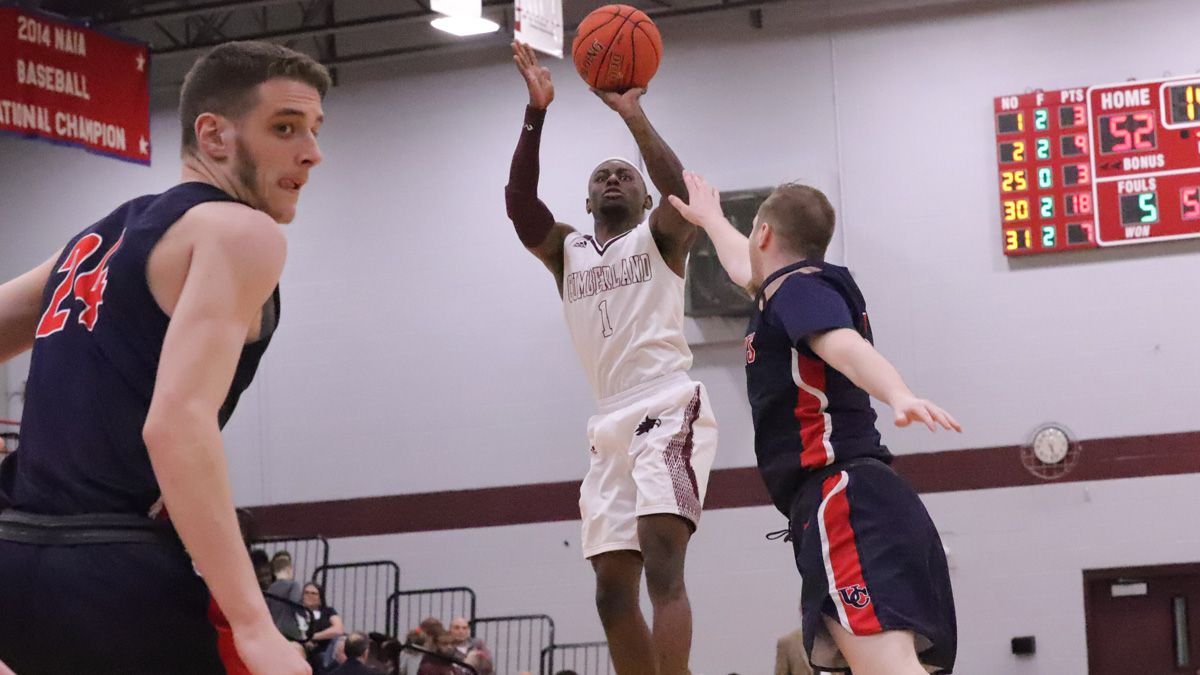 Deiontay Walters made four 3-pointers and finished with 17 points in CU's 88-86 win Saturday against the Cumberlands. (Credit Coy Gill)
#21 Univ. of Cumberlands at Cumberland University | February 23, 2019

LEBANON, Tenn. – Tranard Chester and Andrew Rogan combined for 38 points and Deiontay Walters added 17 off the bench with four 3-pointers, as Cumberland built an 11-point second half lead and held off 21st-ranked University of the Cumberlands, 88-86, in men’s basketball action here Saturday at Dallas Floyd Phoenix Arena.

Walters hit 1-of-2 foul shots at the 1:22 mark and Labranche missed a three on the other end, but Shamari Denson’s 3-pointer with just over 40 seconds to play rimmed out for Cumberland. Malik Colvin-Seldon made two free throws for the Patriots (21-9, 7-7) with 31.2 ticks on the clock, trimming the margin to three.

Chester’s layup with 25.0 seconds to go pushed the lead back to five. Jordan Griggs made a runner on the other end for the Cumberlands with 16.8 seconds left before Walters added two more foul shots for CU with 11.8 seconds remaining.

Hinson’s layup plus the foul with 5.5 seconds to play cut the Phoenix lead to 86-84, but Denson coolly hit two free throws, one after the final timeout for the Patriots, to make it a four-point game with 4.8 seconds to go. Cumberland fouled on the other end, though, sending Hinson to the line for three shots.

He made the first two and missed the last on purpose. The loose ball ended in the hands of Chad Foster with the clock running out and the Phoenix finally holding on for a victory when leading in the final 90 seconds. Cumberland has dropped 7-of-10 Mid-South conference when leading or tied in the last 90 seconds this season.

Rogan netted 20 points and Chester collected 18 while Walters saved his best for Senior Day, hitting 5-of-9 shots overall and 4-for-6 from behind the arc. Denson added 12 points off the bench as well for Cumberland, which made 10-of-23 from 3-point range and 22-for-27 at the foul line in the contest.

Colvin-Seldon posted 31 points and 14 rebounds while Hinson collected 19 points and Griggs finished with 18 points. Caleb Taylor recorded nine points and 13 boards for the Patriots as well.

The Patriots netted the first seven points of the game thanks to five straight misses from Cumberland, but the home team responded with an 11-2 run. Brandon Levier’s short jumper and a 3-pointer from Heath Starkey got the Phoenix on the board and Rogan connected on two straight field goals before an 18-footer by Starkey made it 11-9 CU.

Levier and Chester each hit triples and a jumper by Chester pushed the Cumberland advantage to 19-14. Two baskets by Hinson and a layup from Taylor put the Cumberlands in the lead, 22-21.

Three-pointers by Rogan and Levier and a putback from Starkey accounted for an 8-0 spurt by the Phoenix for a 35-29 edge with just under five minutes left in the period. Baskets by Rogan and Asher Blum extended the lead to eight, but a 3-pointer from the Patriots’ Chance Edwards and one free throw by Nnamdi Van Dulm cut the CU lead to four.

Colvin-Seldon made a layup in the final 20 seconds for the Cumberlands and the Phoenix led 42-39 at intermission. Rogan netted 13 points for Cumberland while Levier collected eight and Chester and Starkey scored seven apiece.

The Phoenix lead stayed between five and eight points for the first eight minutes of the second half until a 3-pointer by Griggs cut the advantage to 56-53 at the 11:16 mark. Walters hit the first of three 3-pointers in the second half at the 10:01 mark, stretching the lead back to seven, and another triple by the senior made it 67-58 with 8:27 to play.

The Patriots would get as close as five after a basket and then 1-of-2 foul shots by Colvin-Seldon, but Walters drilled another triple at the five-minute mark for an eight-point lead. Denson’s 3-pointer and two free throws by Chester pushed the advantage to 11, setting up the final frantic minutes.

Cumberland opens play in the quarterfinals of the Mid-South Conference Championships next Saturday at 9 p.m. CT against Georgetown College in Pikeville, Ky.