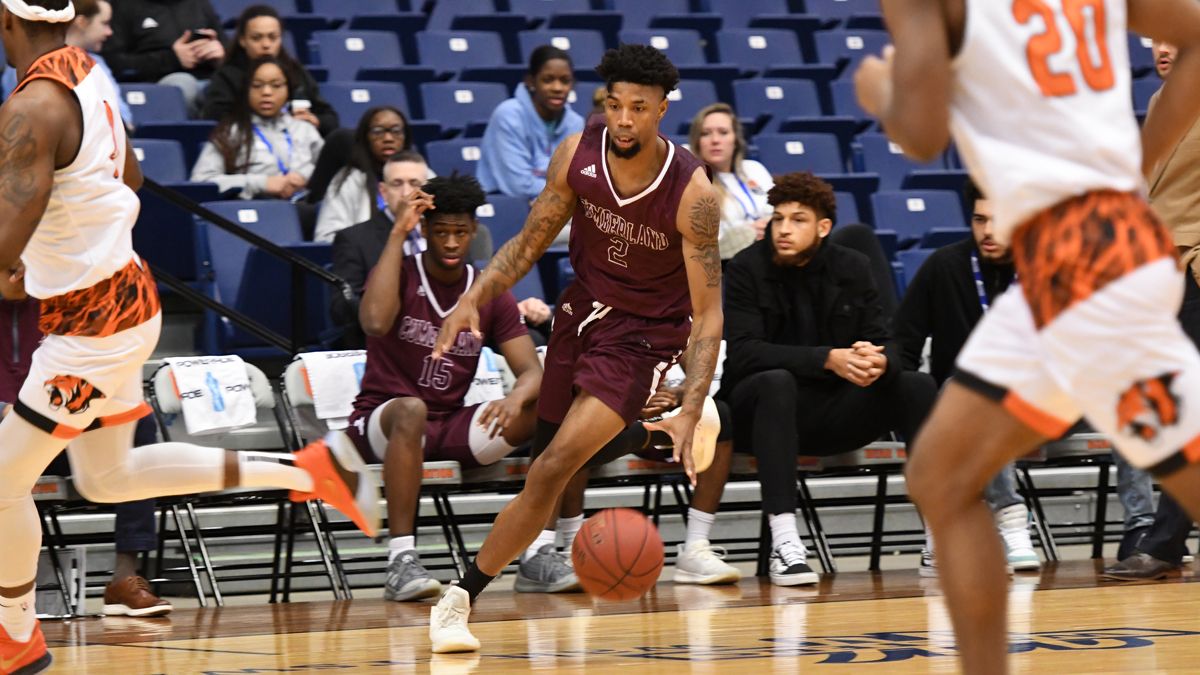 Tranard Chester dribbles up the floor in CU's 88-79 loss Saturday against Georgetown. He posted 22 points for the Phoenix. (Credit Richard RoBards)
Cumberland (Tenn.) at Georgetown (Ky.) | 0,

PIKEVILLE, Ky. – Andrew Rogan scored 23 points and Tranard Chester netted 22 for Cumberland, but third-ranked Georgetown College netted nine of the final 11 points in the contest, holding off the Phoenix, 88-79, in the quarterfinals of the Mid-South Conference Men’s Basketball Championships here Saturday at the East Kentucky Expo Center.

The loss ends the season for the Phoenix (11-15), who once again held the lead for much of the game but were not able to finish in the final two minutes. The Tigers (26-4) put together a 12-2 run midway through the second period to take the lead for good, but Cumberland would not go away, getting as close as two with just under three minutes to play.

Deiontay Walters made one of his four 3-pointers in the contest for a 60-56 CU advantage with 10:33 remaining in the contest, but the Phoenix made just one field goal over the next four-plus minutes, opening the door for the Tigers.

Troy Steward’s old-fashioned 3-point play started the spurt and two baskets by Eljay Cowherd put Georgetown in front, 68-62, with 6:53 to play. Walters ended the drought for Cumberland with another triple and a basket underneath from Rogan pulled CU within four.

Consecutive field goals from Joe Burton, one on a tip-in, pushed the Tigers’ advantage to 77-69, but the Phoenix answered with another three from Walters and then Asher Blum nailed a 3-pointer with 2:57 on the clock.

Cumberland got a stop on the defensive end but then took three straight bad shots – a runner from Walters, a jumper in traffic by Brandon Levier and a 3-pointer from Chester – all but ending the team’s chances to pull the upset.

Brodricks Jones, who made four 3-pointers in the second half, got a fortuitous bounce of the rim, hitting the front but bouncing in from behind the arc, starting the 9-2 spurt to end the contest for Georgetown. Chris Coffey’s dunk pushed the lead to seven and Cowherd’s layup made it 86-77 with 1:02 remaining.

Cumberland’s only points in the final three minutes came on a Chester jumper in the lane with 31.7 seconds to play. The Phoenix hit just 1-of-8 shots after Blum’s three to pull within two.

Walters finished with 16 points off the bench, going 4-for-7 from 3-point range, while Levier netted 11 points. Rogan and Levier each grabbed seven rebounds for the Phoenix.

Steward netted 20 points with five 3-pointers to lead the Tigers. Coffey collected 18 points and 13 boards and Cowherd registered 15 points and 11 assists. Jones scored all 14 of his points in the second half with the four three’s.

Cumberland got off to a quick start with a pair of baskets and a 3-pointer from Rogan and then a reverse layup by Chester for a 9-3 advantage, forcing a timeout by the Tigers. Rogan added a long 2-pointer and two field goals from Chester pushed the advantage to 16-7.

Georgetown put together a 16-5 spurt over the next five minutes, starting with a Coffey putback. Dominique Reed’s old-fashioned 3-point play preceded a pair of 3-pointers by Steward and then a bucket from Reed for a 23-21 Tigers edge with 8:22 left in the period.

Cumberland answered with an 8-1 run, beginning with a jumper by Chester and then two field goals from Levier. Walters drove for a layup and a 29-24 CU advantage at the 4:10 mark.

Steward made his fourth triple of the half to knot the contest at 33 and two foul shots by Malik Down at the 1:15 mark put Georgetown in front, 37-35, at intermission. The Phoenix did not make a field goal over the final 3:00, hitting four free throws during that stretch.

Steward led all scorers with 12 points and Reed netted nine off the bench. Chester posted 10 points for Cumberland and Levier and Rogan each collected nine. CU made only 3-of-12 from 3-point range in the half while the Tigers were 4-for-16, all four makes coming from Steward.