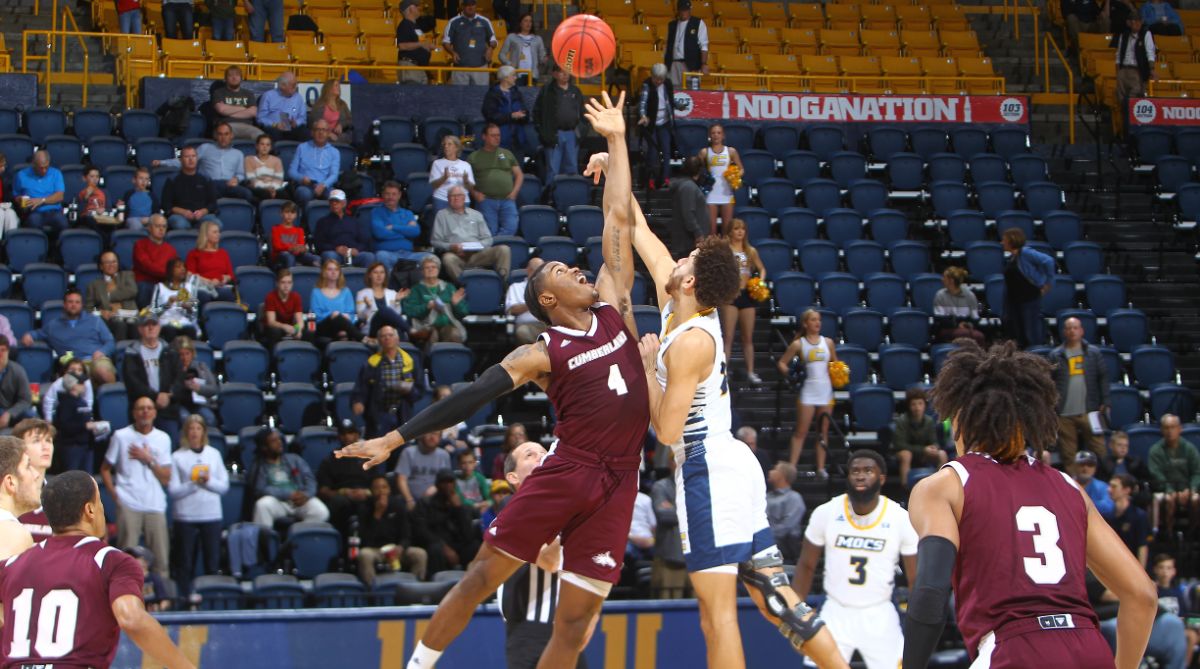 CHATTANOOGA, Tenn.- Phoenix hung around in the first half, but the Mocs took over in the second half as the Phoenix fall 72-42. The game does not go on the win-loss record for Cumberland, but the Phoenix have dropped five straight games including three exhibition games versus Chattanooga, Murray State and Union.

Cumberland (9-5) came into this contest on short rest after playing last night at Murray State. The Phoenix competed the first 15 minutes of the game, but Chattanooga went on a 12-2 run to close the first half. The Mocs controlled the game from that point on and cruised to the win. The Phoenix shot just 35% from the field and only hit 3-of-15 three point attempts during the game. Cumberland was out rebounded 46-25. The Phoenix did however create more offense in the paint today getting 26 points down low, last night Cumberland managed just eight points in the paint.

Ridley got the Phoenix going with a two handed slam in the game’s opening minutes, moments later Davis put in a lay up for Cumberland’s first lead and Duke pushed up a tough running jumper outside the paint. The Mocs, who started slow, came together after the first few minutes going a 6-0 to get ahead of CU 15-9 with 14:01 left in the first half.

Chattanooga really got going over the next four minutes, going on an 8-2 run. The Mocs found Justin Brown down low twice for buckets and David Jean-Baptiste wound up wide open on the left wing for a three, Mocs up 23-11 10:12 left in the first.

Starkey buried a three from the top of the key, but Jonathan Scott hit a contested three from the corner that rattled all the way around the rim before falling to answer Starkey’s three. Ridley hit 14 foot jumper for his sixth point of the day, picking up from his good play last night at Murray State. Starkey rejected Chattanooga’s Ramon Vila, but it wound up in the hands of Trey Doomes for an easy layup. Jean-Baptiste and Matt Ryan each hit three pointers forcing Cumberland into a timeout with just over three minutes left in the half, Chattanooga leads 40-19.

Davis ended a four minute scoreless streak for the Phoenix with a tough left-handed layup. Neither team would score the remaining two minutes of the first half, Chattanooga up 40-21.

Duke and Ridley scored the first four points to energize Cumberland in the first minute of the new half. Levier drove right past everyone a few possessions later to really get CU going temporarily.  Maurice Commander finally found the mark for the Mocs hitting a three pointer, CU trailed 46-27 with 15:05 left.

Vila and Kenic backed down CU defenders in the paint for the Mocs. Vila was fouled down low by Davis and hit both his shots at the charity stripe for a 9-0 run. Stargell picked up four straight points before Jonathan Scott threw down a monster slam to spark the Mocs and get the crowd fired up. Chattanooga took over as the game began to break down a bit for the Phoenix who came in on tired legs after playing a night game last night at Murray State. Chattanooga led 64-33 with 7:04 to go.

Stargell heated up off the bench late in the game with two deep two point jumpers. Cumberland defense broke down as the Phoenix were caught chasing the ball, Kenic was able to find Doomes wide open streaking to the basket for an easy dunk, Mocs up 67-42. Chattanooga will added five more points and cruise to a 72-42 win.

This was the ninth meeting between Cumberland and Chattanooga as the Mocs hold the advantage 8-1.

Cumberland will turn their attention to their conference schedule picking up back up next Saturday at Campbellsville, Kentucky. The Phoenix are 1-1 in their first two Mid-South games of the season.