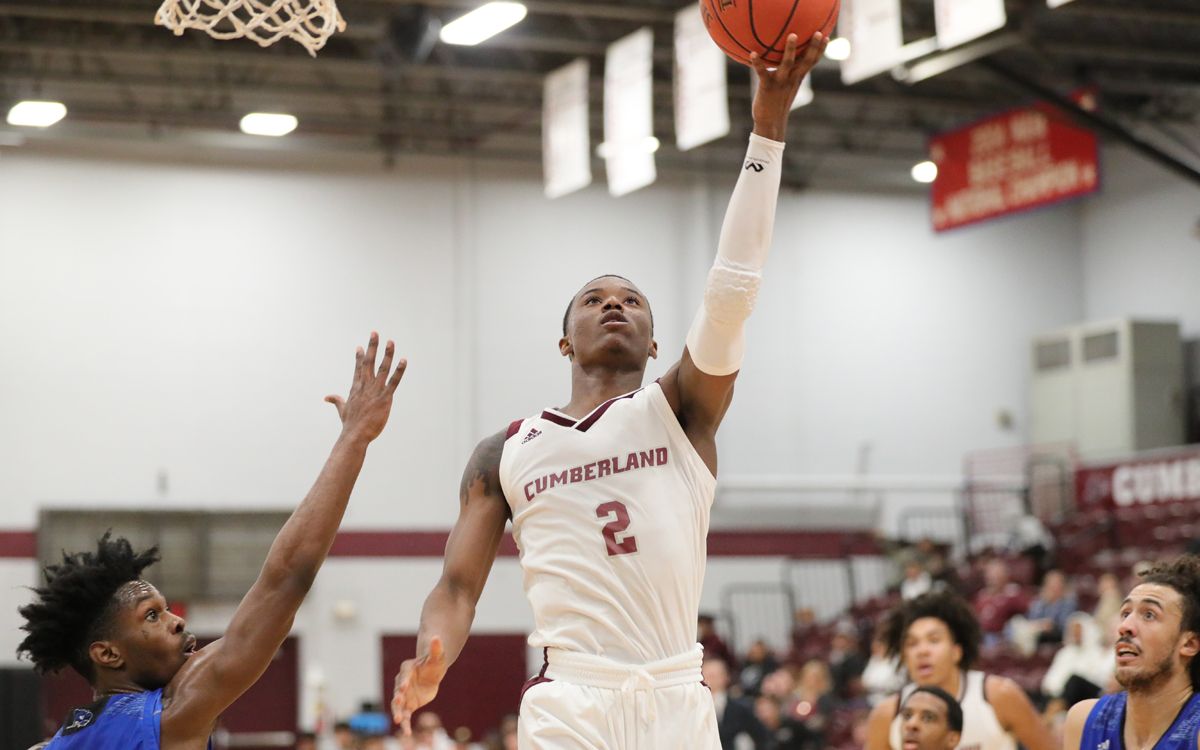 LEBANON, Tenn.-  Jalen Duke took over late in the game scoring 14 of his 20 points in the second half and TJ Stargell was sent to the line on two separate occasions in the final 14 seconds of the game and hit four clutch free throws in the 63-60 win over No. 19 Lindsey Wilson. This is Cumberland’s third straight home win versus Lindsey Wilson.

Cumberland (10-6, 2-2 MSC) and the Blue Raiders had an absolute battle tonight with both team gathering six leads and none bigger than six points. The Phoenix went 22-of-58 from the field and only managed to hit three three pointers on the game. Cumberland shot very well from the free throw line going 16-of-18 including big free throws down the stretch.

Jalen Duke dominated late in the game for the Phoenix racking up 20 points and seven rebounds. TJ Stargell posted 14 points and collected six rebounds and five assists.  Aaron Ridley went for 10 points in his five straight game with double-digit points. DeMari Davis only collected six points, but he was very active on the boards collecting 14 rebounds.

Reece Brooks scored 18 points for the Blue Raiders on 7-of-15 from the field. Avery Edwards went for 13 points down low and Kel Stotts posted 10 points on 4-of-10 shooting.

Jalen Duke put in a put back for the first points of the night on the Phoenix first possession. Stargell picked in four early points on drives to the basket in his first start of the season. Starkey ignited the Cumberland crowd with a two handed slam after checking in early to matchup with Lindsey’s length, Phoenix up 10-7 with 15:12 to go in the first half.

The Blue Raiders seemed to find every offensive board early on helping them find Cundiff wide open in the corner for a three. Blum responded with a three from the left wing, but Brooks went right back at the Phoenix with another three, Phoenix lead 16-13 with 12:35 left in the first half.

Blum collected easy points off an inbound play to extend the lead, but Stotts came right down and hit a three from the top of the key. Edwards collected two points down low on a strong post move and Brooks hit a jumper from the free throw line to tie it 20-20.

Starkey put back a Stargell miss as well as two points at the line for a quick four point swing. Brooks threw up an alley oop to Mack to ignite a 9-0 run by the Blue Raiders and give them a 29-24 lead with 3:14 left in the first half.

Duke put back his own miss for the Phoenix and Stargell came up with a steal at halfcourt to put CU down by 1 going into halftime, 29-28.

Edwards and Davis each traded blows down low on each other on both CU and LWC opening possession of the second intermission. Stargell regained the lead for Cumberland with 16:20 when he blew past everybody on the floor and rolled it in for a layup. Lindsey came back with a 4-0 spurt to go up by three highlighted by Brooks going up and under for the dish to Diagne, but Duke hit a big contested three to knot the game back at 37-37 with 14:12 left.

Brooks buried a deep three and Duke went back and hit a deep two pointer as each team continued to trade points with each other. Blum hit a 20-foot two pointer and Stotts drilled a three from the top of the key, 45-44 Lindsey Wilson with 8:42 to go.

Ridley used a nice post move to put Cumberland on top by two with just under five to go. Cundiff hit two free throws to knot it again as neither team could find the advantage late in this game. Stargell seemed to be stuck at the top of the key, but found Duke at the left wing who pulled a quick trigger three that went in off the glass, 55-52 with 3:23 left in the game.

Diagne found an opening in CU defense for an easy two pointer down low. Duke hit a 20 footer as Cumberland isolated him with his defender. Davis stuffed Brooks down low on the other end to give CU a boost in this emotional game, 57-54 Phoenix with 1:58 to go.

Davis was stripped down low with Cumberland up by three giving Lindsey a fast break, but Starkey was able to get in front of hurt and foul him, Hurt missed the second free throw and Lindsey fouled Stragell sending him to the lineup by two with 21. 4 seconds left. Stargell nailed both free throws to put the Phoenix up by four. Brooks drilled a deep three and Lindsey took a quick timeout with 11.0 seconds left.

Lindsey Wilson sent Stargell to the line again and he yet again hit two big free throws to put CU by three with 11 seconds to go. CU forced Brooks into a deep three that fell off the mark and Ridley corralled the rebound and dribbled it out for the 63-60 win.

Cumberland is back at home versus the University of the Cumberlands at 8 p.m. The Patriots are just outside the Top 25 Coaches' Poll.