University of the Cumberland at Cumberland University | January 09, 2020
BoxscorePlay-by-Play1st Half2nd Half

University of the Cumberland 80 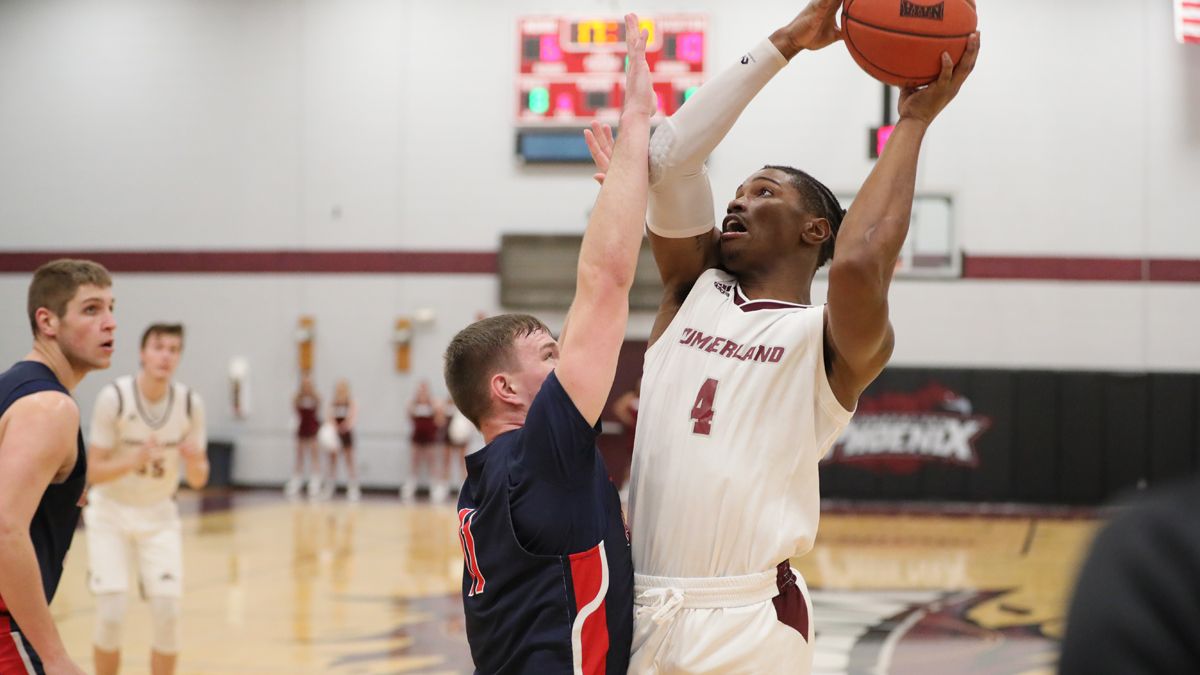 LEBANON, Tenn.- DeMari Davis went for 22 points and Jalen Duke posted another double-digit scoring night, but it was not enough as the Phoenix fell cold in the final five minutes of the game and dropped a conference loss to the University of the Cumberlands, 80-69.

Cumberland (10-7, 2-3 MSC) shot 46% from the field and 40.9% from three, but went cold in the last minutes of the game allowing the Cumberlands to go on a 10-0 run. DeMari Davis went for a season-high 22 points and seven rebounds. Duke recorded his 15th double-digit scoring game of the season. TJ Stargell went for eight points, six rebounds and four assists. Jaylon Negron saw action in his first game since November 26th with an injury scored seven points on 3-of-3 shooting.

The Phoenix opened up the game drawing a play for Stargell to get an open three. The Patriots corralled an offensive board and Olison answered right back with two deep threes for the Patriots. Duke pulled a quick one from the left corner as both teams look to shoot out of the gym early.

Fitzgerald and Taylor each scored buckets in the paint and Strakey put it back within one point with a three from the left corner. Cumberlands yet again had answer, this time it was Sapp beyond the arc and Taylor posted two more points in the paint, Patriots up 16-11 13:21 left in the first half.

Davis made an untypical stepback move from the top of the key for a 20-foot two pointer and Duke drilled a mid-range jumper while getting fouled by the Patriots Hinson, he converted the free throw. Stargell drilled a three from the right wing to go up by three, Phoenix lead 19-16 with 11:07 left in the first.

Cumberlands fought back to get up by four after Griggs was fouled by Jalylon Negron going to the paint and converted the and one, but Negron hit his first bucket since returning from injury beyond the three point line. Not seven seconds later on the game clock, Sapp hit a three from the corner again. Taylor backed down Davis down low for two point bucket, but like this game has gone Davis answered with a three, Patriots up 28-27 7:58 left.

Ridley gave the Phoenix the lead again after driving past his defender and hitting a layup while getting fouled, he converted the free throw. The Patriots found Taylor streaking towards the basket and dished it to him for a one handed slam. The Phoenix dished it out to Davis for a three from the left wing and Blum made a good post move on the Patriots big man for two points and to go up by five.

Cumberland began to turn up the pressure late in the first as Davis hit on another jumper and Stargell dished it out to Starkey in the corner for his second three of the game. Taylor pulled in an offensive board and put up the lay in to end over a three minute scoring drought by the Patriots. The Patriots tried to throw it off Christian Smith to get the ball back, but Smith was able to catch and pass it up to Stargell who found Davis for an easy lay up just before the half ended, Phoenix lead 42-37.

Patriots struck first in the second half after big man Taylor pulled down an offensive board and threw it out to Griggs who hit a three from the right wing. Olison scored the next four points for the Patriots and Duke hit yet another old-fashioned three to give the CU the lead. Davis scored the next four points as the Phoenix held the Patriots scoreless over a few possessions, CU 50-44 13:47 left.

Cumberlands  went on a quick 6-0 spurt to tie the game. Ridely hit a 15 foot jumper from the top of the key, but Olison answered with a deep three. Davis continued to explode scoring the next four points for CU, yet again, but Cumberlands was able to take the lead and push it out to 61-56 lead on back to back threes by Sapp.

Duke hit his patent mid range fade away jumper before Cumberlands before Brown and Taylor would pick up points down low and Hinson would pull up for a 15 footer. Duke tried to take a 3-on-1 by himself and missed the lay up, but Negron was the to pick up the board and put in while getting fouled. Negron would miss the free throw, but CU was able to maintain possession as the ball would go out of bounds of the Patriots. Negron went on to hit a jumper off the inbound and the Patriots would pick two points back up real quick, 71-64 Patriots.

Blum finally stopped a scoring drought for the Phoenix with a three at the top of the key, but the Patriots were able to push the lead out to 15 points, it was a little too late for the Phoenix as they put themselves in a deep hole late in the game, Patriots win 80-69.