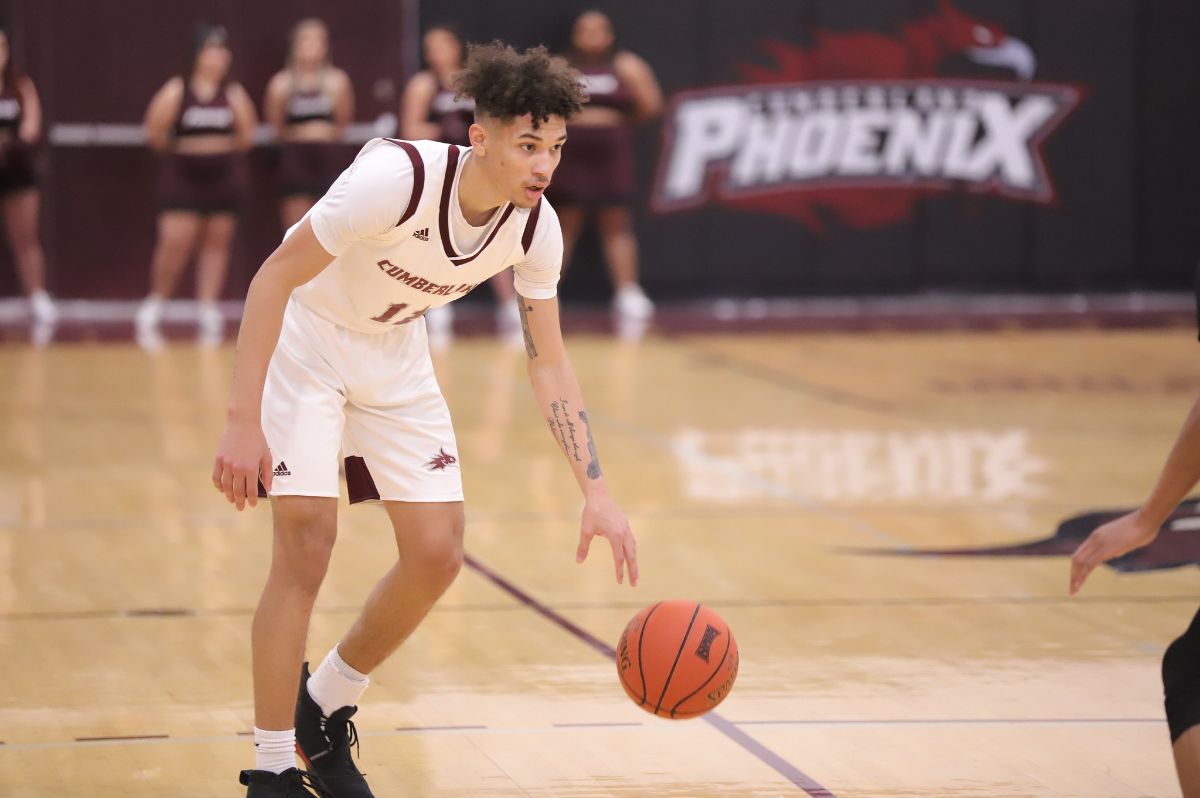 MARIETTA, Ga.-  Life uses a strong second half to pull away from the Phoenix on their senior night, 82-70.

Cumberland (13-14, 4-10 MSC) shot 37% from the field and made 11-of-23 three pointers. Jalen Negron posted a career-high with 23 points on six made three pointers and six rebounds. Brandon Levier scored 14 points. Jalen Duke made 11 points in just 25 minutes, the least amount he has played since November 2nd as he picked up three fouls in the first half. TJ Stargell recorded 10 points, eight rebounds and five assists.

Horton hit two from the free throw line. Life left Negron wide open and he made them pay with his second three of the game, this one from the left wing. Maxwell again made a nice move under the basket to get two points. Duke and White traded two free throws for each team and Davis tacked on two from the line. Mike White drove and made a nice move for a two point layup and Stargell buried a three. Cumberland made a stop defensively and found Negron for his third three of the game to tie it 19-19 with 9:46 left in the first half.

Alex Bean scored on a strong bucket down low to give Life the two point advantage. Phoenix defense forced a turnover and had nice ball movement to find the nation’s leading three point percentage shooter wide open as Jalen Duke buried a three, but moments later Duke picked up and fouls number two and three forcing him to come up. Gamble drilled a deep three to go up 26-22 with 6:16 left.

Levier got two points back with a deep two pointer. Gamble drew a foul on a deep three and hit all three from the line. Stargell hit a deep two from just about the same spot that Levier hit from moments before. Starkey got tangled up on a rebound and two Life players left the bench causing ejections for Cam Horton and Zach Stewart. After all that action, Life had two free throws and hit both. Levier scored four straight points for Cumberland to cut it to a one point lead with 3:27 left.

Maxwell hit a Dirk Nowitski like fade away before Stargell hit one from the charity stripe. Stargell made a nice crossover leaving Gamble at three point line for an easy two. Gamble got his revenge with a deep three from the left wing and Maxwell followed with a three from the same spot. Isaac Stephens hit one free throw to bring it to 39-34 at the end of the half.

Negron hit one of two free throws to open up the second half and Levier collected his own miss for two points. Jordan Hernandez drilled a deep three to get the points back and Maxwell scored two down low and hit a three for a 10 point Life lead with 16:40 left.

Leible added on from the line as Duke picked up his fourth foul and was forced to come off the court. Gamble hit a deep three to send the crowd into a frenzy as they go up by 16 with 13:54 to play.

Gamble again hit a deep three, but was called for a technical foul as he was taunting after the play. Levier hit both from the free throw line. Hernandez took a screen and went right to the rack for an easy two. Negron finally hit a field goal after eight minutes went off the clock without a field goal for the Phoenix, 58-41 with 11:42 left.

Bean made a hook shot from just outside the paint just before Starkey stepped into a three. Stargell made a nice play stealing the ball in the backcourt leading to one point from the free throw line from Davis. Mike White got three of the points back with a triple from the right wing Life up by 18, 63-45.

Levier hit a 15-foot jump shot and White hit another three from the same exact spot as moments ago. Maxwell hit a stepback three as Life continued to bury the three pointers. Negron got three back on the next possession with a triple from the corner. Maxwell drove and dropped it off to Reid for an easy two points, but Levier answered with a tough jumper from the baseline through contact. Cumberland got a defensive stop and threw a deep outlet pass to Stargell for an easy two points, Phoenix trail 71-54 with 5:02 to play.

Life came up with an offensive rebound and chewed a lot of clock before dishing it to Leible down low for two points. Negron hit his fifth three of the night from the left wing. Monson drew a foul and hit two free throws and Duke hit a three from the right wing to cut it to a 12 point lead, 74-62 with 2:32 to go.

Cumberland went into the full court press, but Life was able to get through and Leible hit a nice reverse layup. Duke fired a three quickly from the left corner and drilled it to keep fighting back in this game. Negron drew a foul and hit both from the line to cut it down to a nine point lead. Life got it to Maxwell for an eight foot jumper just before Cumberland picked up two offensive boards before finding Negron for a three, 78-70 with 35 seconds left.

Cumberland fouled White on the inbound and he hit both free throws to push it out to a four possession game. Phoenix got the ball to Duke, but he had to force up a tough three and it missed. Cumberland again fouled on the rebound and Hernandez hit both to end it, 82-70.

Phoenix will return home next week to take on No. 1 Georgetown and No. 18 Thomas More on Thursday and Saturday.