Attendance: 0
Recap Boxscore
Phoenix take No. 2 Georgetown to the wire 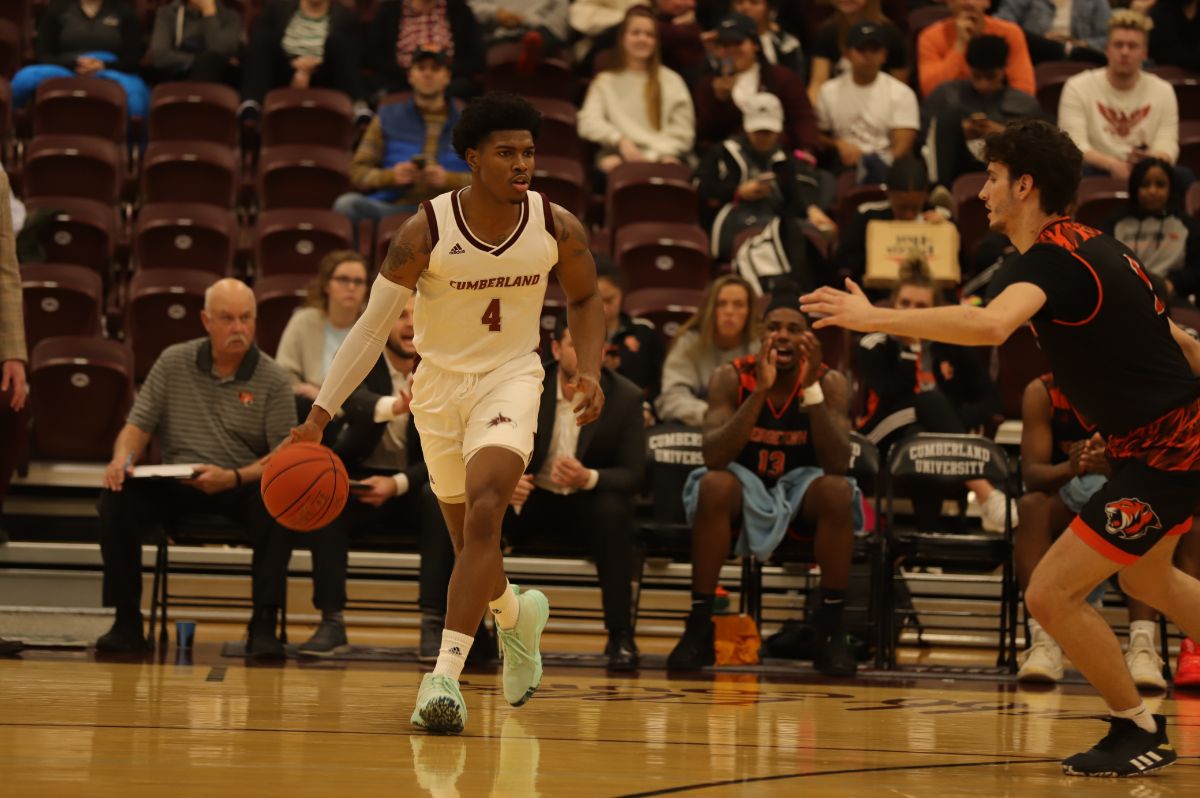 LEBANON, Tenn.- Cumberland men’s hoops gave No. 2 Georgetown all they can handle, but the Tigers pulled out  the victory in the second half, 82-74.

Cumberland (13-15, 4-11 MSC) shot very efficiently tonight hitting 49% of their shots and 7-of-10 from deep. The Phoenix were dominated on the boards as Chris Coffey and the Tigers posted 40 rebounds to Cumberland’s 26.

Four Phoenix posted double-digit points. Jalen Duke posted a team-high 18 points on 6-of-14 shooting. Brandon Levier went 7-of-10 from the field for 16 points. Forward DeMari Davis picked up 14 points and four rebounds and point guard TJ Stargell scored 13 and had five rebounds off the bench.

Georgetown (26-2, 13-2 MSC) started off sluggish as they only hit one three in the first half, but heated up quickly in the second half shooting 50% for the game. Chris Coffey dominated down low for the Tigers posting a double-souble with 26 points and 14 rebounds. Point guard Eljay Cowherd went for 15 points and 10 assists. Jacob Conway was the last Tiger in double-digits with 16 points.

Isaac Stephens put Cumberland ahead on their opening position in the paint and Levier hit a jumper from 15 feet out after a steal. The Tigers responded with an 8-0 run on some nice moves by Jake Ohmer. Davis worked his way in the lane for a two point jumper. Stargell knocked down a pull up jumper from just inside the free throw line, but Cowherd finds Coffey for a two-handed slam. Tigers up 11-8 with 14:15 left in the first.

Jalen Duke finally got touches in open spots and knocked down a two and a three on back to back possessions to regain the lead. After a Tiger two pointer, Stargell knocked down two from the charity stripe and Davis finished a tough physical lay-in. Kole Monson buried a three from the corner on an inbound play. Two straight two pointers for Georgetown cut it to 20-18 with 9:25 left in the first half.

Stargell picked up an assist on a long outlet pass to Duke who fought through tough contact at the rim for two points. Duke found some space off a screen at the free throw line for two points. Coffey and Ohmer scored two points to keep it tight, but Asher Blum used a nice shot fake and drove through the lane for two. Phoenix lead 26-22 with 5:13 left.

On an inbound play out of the media, the Tigers dished to Coffey who threw down a huge dunk and scored three more points to retake the lead. Levier knocked down a pull up jumper and Cowherd dished it to Coffey down low to trade blows. Davis went up strong for two points as the lead has changed several times.

Stargell blew past Cowherd for two points at the rim and Davis drained a triple from the right wing to go into half up 35-33.

Jacob Conway scored quickly for the Tigers to tie the game at 35-35. Cowherd drilled a jumper from the free throw line to take the lead. Davis hit another three from the top of the key and Coffey converted on a jumper. Levier made a nice wrap around pass to Stephens for two points, but Georgetown started stroking three pointers forcing Cumberland into a timeout, 47-42 Tigers with 15:59 left.

Tigers continued a strong second half out the timeout forcing a missed shot and dishing it up to Coffey for another slam. Levier scored on a step back jumper and the Phoenix forced a turnover capitalizing on it with one point from the free throw line. Cowherd again dished it down low to Coffey for two points before the Phoenix found Negron open in the corner for a three. Kubobat scored his first points on an 18 foot jumper, 53-48 with 12:09 left.

Conway scored on a physical layup down low. Duke hit a jumper and then found Levier for a three in the right corner. Jaquay Wales answered with a three from the right wing for the Tigers and then Stargell blew past everyone for a layup, 62-58 Tigers up with 8:18 left.

Stargell picked Coffey’s back pocket and then took it all the way for two points and Cowherd was called for a technical allowing Duke to get two points back from the line. Davis took a leaning jumper and buried it to tie the game at 64-64 with 7:13 to play.

Stargell again made a nice play with a left-handed scoop layup. Cowherd converted on a layup while getting fouled by Duke and Coffey backed that up with two pointer. Duke scored two from the line and Levier hit a layup, but Georgetown scored four straight points to go up, 77-71 with 2:20 left.

Tigers found Coffey for another slam before Levier buried a triple at the top of the key, but Cumberland was unable to score for the remaining one minute and a half winning 82-74.