0,
Bowling Green, KY
Attendance: 145
Recap Boxscore
Life holds on to beat CU after a late rally in the MSC Tournament 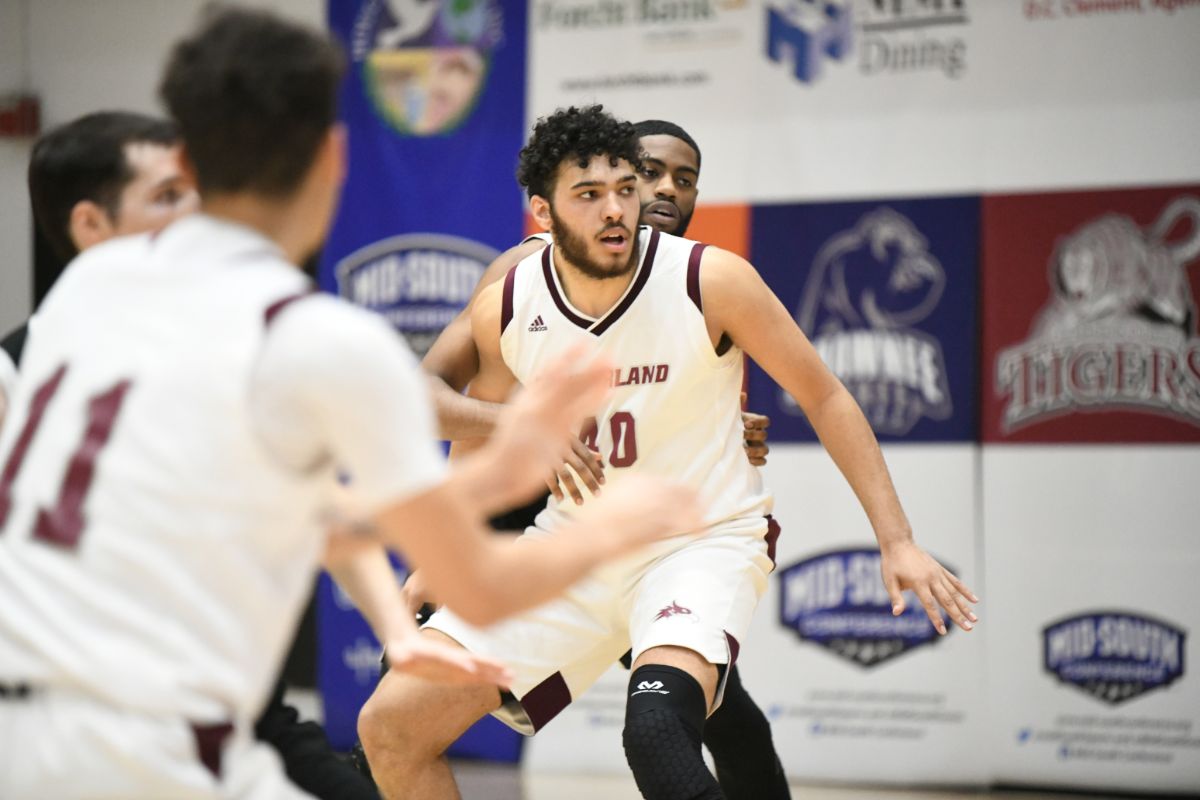 LEBANON, Tenn.-  Cumberland fought hard to overcome a 13 point deficit in the second half, but ultimately fell just short as Life wins 69-64.

Cumberland’s (13-17) season will come to an end as the Phoenix lose in the Opening Round of the Mid-South Conference Tournament. The Phoenix shot 49% from the field, but struggled from three only hitting 3-of-14.

Sophomore Isaac Stephens scored a team-high 16 points and Jalen Duke scored 10 points, but struggled going 4-of-14 from the field. Jaylen Negron put up nine points, DeMari Davis finished with seven points and Aaron Ridley in his first game back from injury put up seven points.

Life (12-18) came out in the second half and used a strong start to build up a big lead and chewed the clock late in the game to hold off the Phoenix for the win. Antwan Maxwell led the way with 20 points while Cam Horton scored when the Running Eagles needed it the most with 18 points.

Davis scored the first points of the game with a strong post move off the glass. Cam Horton answered with a three from up top. After three minutes of scoreless action, Blum checked in and fought through tough contact to score. Connor Gamble who lit CU up at Life drilled a three to answer as Life leads 6-4 with 15:25 left.

Ridley picked Gamble’s pocket and flushed it home on the other end to tie the game and Stephens made an up and under layup to take the lead. Life had a nice inbound play to get the ball to Antwan Maxwell for a dunk. Bean rattled one home from the line and Maxwell made two to put Life up with 12:02 left in the first half.

Levier checked in and got to his spot for a 15 foot jumper. Davis slammed one home to tie the game after a Horton free throw and then Life broke the Phoenix’s press for an easy dunk. Levier again drilled another jumper to continue the back and forth action.

Horton got free down low for an easy two for the Running Eagles. Maxwell took Ridley one on one and hit a fade away jumper from the free throw line. Stephens tipped in a Duke missed shot and Ridley made two from the charity stripe to tie the game 18-18 with 8:24 left in the first.

Cam Horton again hit a three from the left wing, but the Phoenix with a triple from Ridley from the right wing. Duke scored his first points of the game in the paint, but Gamble buried a three and scored to from Alex Bean. Stephens hit two from the line, but Maxwell converted a three point play to give Life their largest lead of the game up to this point, 30-25.

Stephens continuing to play well made a layup down low and Life scored two from the line by Mike White. Levier used an explosive dribble drive to get in the lane for two points and Davis converted on a left handed hook shot to cut it to one, but again Horton hit a three for the Running Eagles and Bean converts on a tough two down low to end the half, 37-31 Life.

Stephens scored first to open up the second half before Life went a 5-0 spurt with three points from Maxwell and two from Leible. Stephens again scored down low, but Life found Leible twice down low on defensive breakdowns by CU for an 11 point lead, 46-35 Life.

Maxwell created separation from Davis for two points and Duke scored down low, but Life beginning to hit everything as Gamble scored. Stephens dished it Negron to for two points to cut it to a 10 point lead with 13:08 to play.

Negron again beat everyone down the court an easy two points, but Horton answered with a two of his own. Stephens hit a layup down low as Cumberland continued to chip away at the lead. Stargell buried a triple from the right corner to get the Phoenix to come alive.  Blum hit a turnaround jumper to cut the lead to five with 10:16 left.

White hit a three after a big offensive rebound by Life. Stargell blew by everyone for two point layup. CU gets a stop on the defensive end and Stephens finished on the other end. Leible hit a 15 foot jumper from the baseline to push it back out to a six point lead.

The Running Eagles began to chew clock with the ball on the offensive end as they took a full minute off the clock with one possession. Stephens found himself in some trouble down low, but swung it to Negron in the corner for a triple. Negron follows that up with a fade away jumper in the lane to make it a one point game.

Horton again made plays when his team needed it as CU cut it to one he made a difficult shot for a three point lead and Davis fouled Leible, but he made just one of the two. After a break in the action due to a technical difficulty, Cumberland gets it to Duke for a two pointer off the inbound, 62-60 Life.

Ridley fouled Maxwell on his way up for two point from the Life and Duke scored again in the lane for two points. Duke draws an off ball foul to foul out Hernandez and get to the line for the one and one, making both to tie the game.

Maxwell squared his shoulders and pulled up for two points and Stephens made a great play to get an offensive board and get the ball back and get the jump ball call, keeping possession with the Phoenix. Horton made a hustle play to steal the ball from Cumberland and give Life a chance to take two possession lead. Gamble hit one free throw to make it a three point game. Cumberland tried to find a shot, but could not get a good look as Life did a great job defending the three to hold on for the victory.