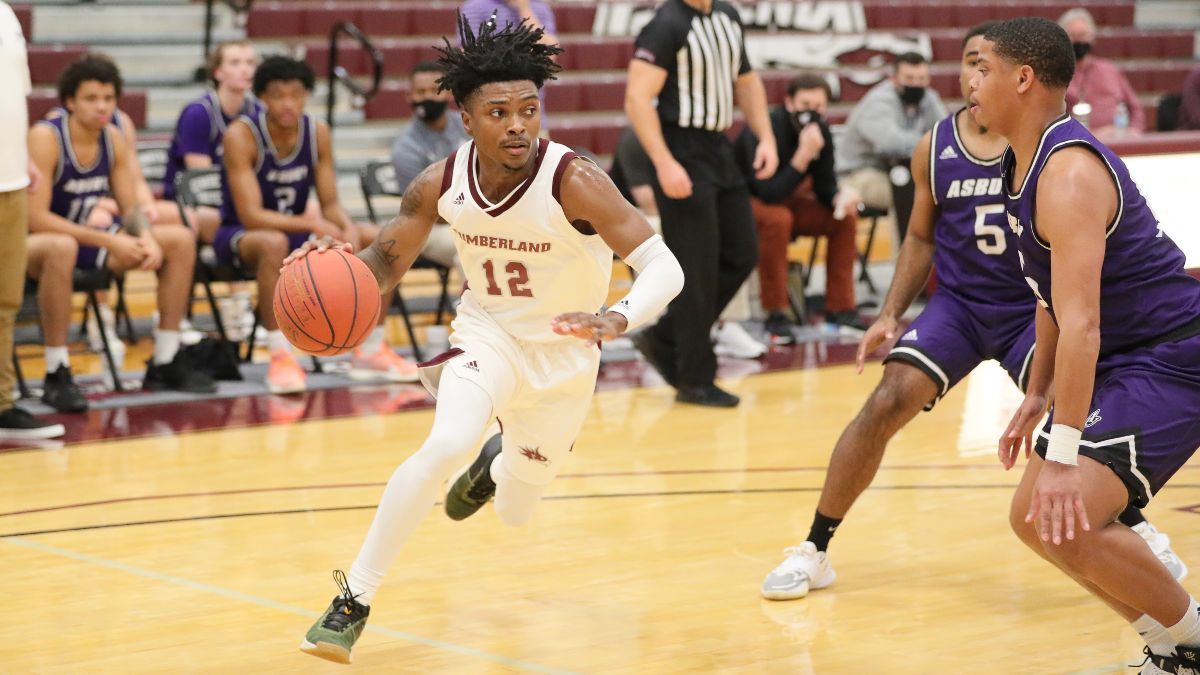 Senior Tavon King led the Phoenix in scoring with 17 points and had opportunity to tie it at the buzzer, but came up just short. (Credit: Steve Wampler)
Asbury Univ. at Cumberland University | November 14, 2020

LEBANON, Tenn.—Cumberland men’s basketball gets their season opener spoiled by Asbury losing 74-71. Senior Tavon King had the ball in his hands with a chance to tie on a deep three but came up just short as the clock expired.

Cumberland went 25-of-57 from the field in the opener but shot 28% from behind the arc. The Eagles shot 44% from the field as well, but the big difference in the game was what Asbury did beyond the three-point line, shooting 47.6% and nearly 65% from three in the second half. Asbury outrebounded the Phoenix 37-31.

Asbury had four players in double-digits led by Leander Ridgeway and Eric Powell each posting 18 points. Ridgeway also had a game-high 17 boards and went 12-of-12 from the free-throw line.  Powell went 4-of-5 from deep and added two assists.

Nick Fort a transfer from the University of Charleston posted 12 points and four rebounds for Asbury and John Shoulders came off the bench for 13 big points including two triples late in the game.

CU and Asbury went back and forth knotting the game at 12-12 with 12 minutes to play in the first half before Cumberland went on a 7-2 spurt to get up by five points. A pair of free throws from Shoulders and three free throws from Negron allowed the Phoenix to get up by six points, their largest lead of the night.

Asbury went on a run to tie the game at 22-22 after a Holifield layup and four free throws from Ridgeway.

Trailing 35-33, Banks hit a triple from the wing to give Cumberland a one-point lead at the intermission.

Back to back triples from Goliday and Fort to open up the second half for the Eagles, a steal by Holifield led to another two points forcing CU into an early second-half timeout. McClendon came out of the timeout and hit a jump hook outside of the block to put an end to the Asbury run.

Stephens hit a couple of free throws and King drilled a deep three from the left-wing as the shot clock expired. King then took over from the top of the key and drove past a defender for two. Asbury took a full timeout to slow the Phoenix momentum, 48-47 Eagles.

First play out of the timeout, King after a nice spin move dished it to Stephens for two, but Asbury responded quickly with a two from Goliday and three from the corner from Powell. Coach Lewis took another full timeout as the game continued to go back and forth.

Chad Foster drilled home a three to ignite the crowd and give Cumberland a big spark. Cumberland managed to get three offensive boards on the same possession but did not get any points out of the possession. Banks drilled a triple from the left wing to put CU within three with nine minutes to play.

Back and forth action, until King picked Goliday’s pocket and is fouled at the rim, he converted on both free throws to cut it to a four-point lead with four minutes left.

Powell hit two free throws and Fort made a spinning scoop layup to get the lead for Asbury back up by eight points. Stargell was able to respond with a quick two followed by a Phoenix timeout to regroup.

Out of the timeout, Banks hit another three and a fast-break layup after Stargell striped Goliday of the ball to cut it to 70-69 with 58 seconds left.

Holifield converted on a jumper to extend it back to three points, but Negron answered quickly with a two. After three fouls to send Ridgeway to the line he finally hit both free throws. With 12 seconds left, Tavon King took the ball across half court and tried to sink a deep three, but fell just short as the time expired.

Cumberland is scheduled to travel to McKenzie, Tennessee on Thursday for their season opener.