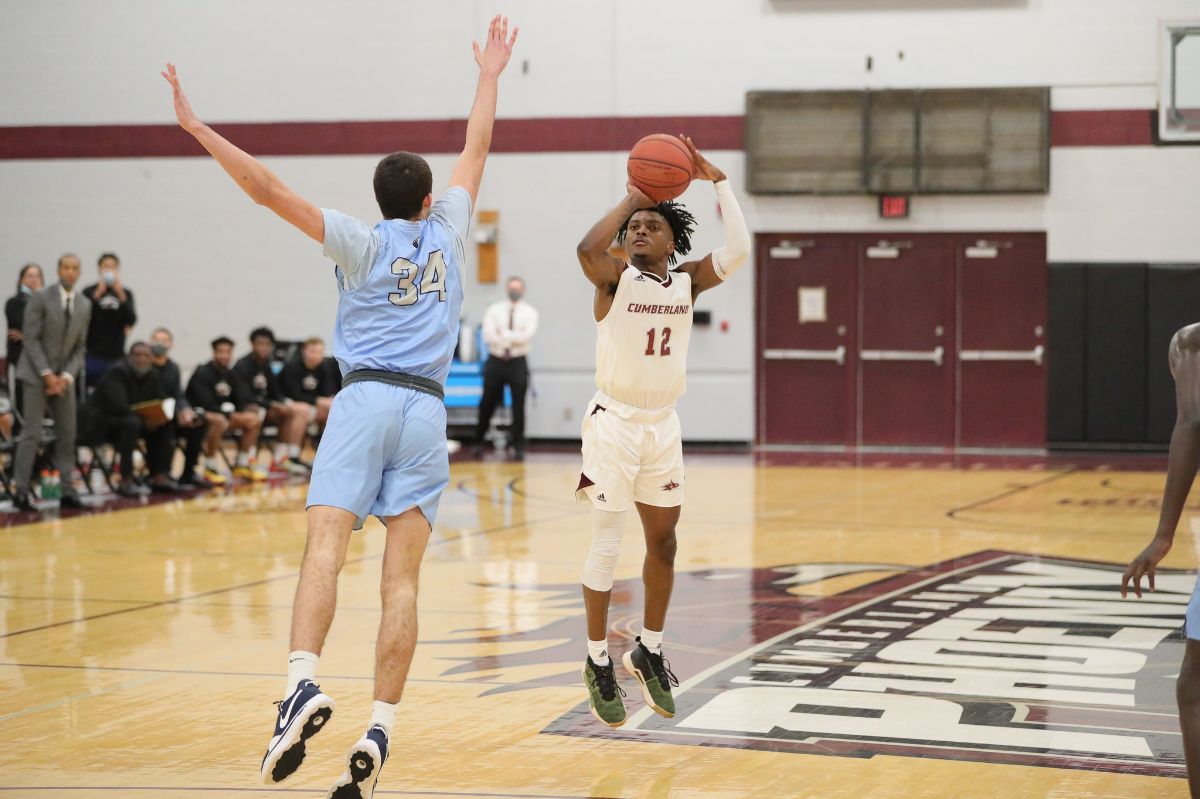 Senior Tavon King scored 22 points in the second half of the loss to No. 24 Martin Methodist. (Credit: Steve Wampler)
Cumberland (Tenn.) at Martin Methodist College | 0,

PULASKI, Tenn.-- Cumberland scored 51 points in the second half but a slow start for the Phoenix led to a 77-74 loss to host No. 24 Martin Methodist in men's basketball action Saturday afternoon. Four players scored in double-figures asTavon King netted 24 points, 22 came in the second half, Aaron Ridley and Isaac Stephens added another 15, and Tyler Byrd recorded 10.

Cumberland (5-4, 4-3 MSC) again strated slow in this game only scoring 23 first half points, but again was able to put up 50 plus points in the second half for the third time this season. The Phoenix shot 44.3% from the field and drained nine threes, but the difference in this game came at the free throw line. The Phoenix hit 11-of-21 free throws, but sent the RedHawks to the line 35 times where they converted on 26 of them.

No. 24 Martin Methodist (10-1, 6-1 MSC) was slowed down early in this game, but when it came down the stretch it seemed like the RedHawks always had an answer when Cumberland gained a little bit of momentum. Adarion Hudson led the team with 28 points going from 14-of-18 from the line and dishing out five assists. His backcourt partner Darrin Jenkins went for 21 points and five rebounds. The RedHawks also got 26 points off of the bench.

The Phoenix jumped out ahead early going on a 7-0 run all from Ridley, but action slowed down from both teams in the first half after that. Chad Foster hit a three to put Cumberland up 11-7 with 11:31 left in the first half.

After triples from Jaylen Negron and Ridley Cumberland held a 17-11 lead with 7:35 left in the half, but Martin Methodist would go on an 11-0 run over the next six minutes to take the lead 22-17. The RedHawks never trailed from this point on and took a 26-23 advantage into the intermission.

Ridley picked up a steal and a quick two in the opening seconds of the half, but MMC would use a 7-2 spurt to get up 32-27. After bot teams trade buckets until it was 38-34, the RedHawks went on another 7-0 run to get up 45-34 forcing Cumberland into a timeout.

Cumberland would cut it to a five point game at the 10 minute mark, but the Phoenix continued to chase Martin Methodist, 50-45. Adarion Hudson scored the next 10 points for Martin Methodist cashin in some opportunities at the free throw line and hitting a deep three to push the lead out to 60-50 with 5:13 remaining.

Tavon King scored 13 out of the team's final 24 points in the last five minutes as the action picked up, but Cumberland was never able to catch Martin Methodist as they always responded with points when Cumberland gained any momentum winning 77-74.

The squad is back in action on Thursday, January 16 at home when No. 11 University of the Cumberlands come to Lebanon for 8:00 p.m. tip-off.