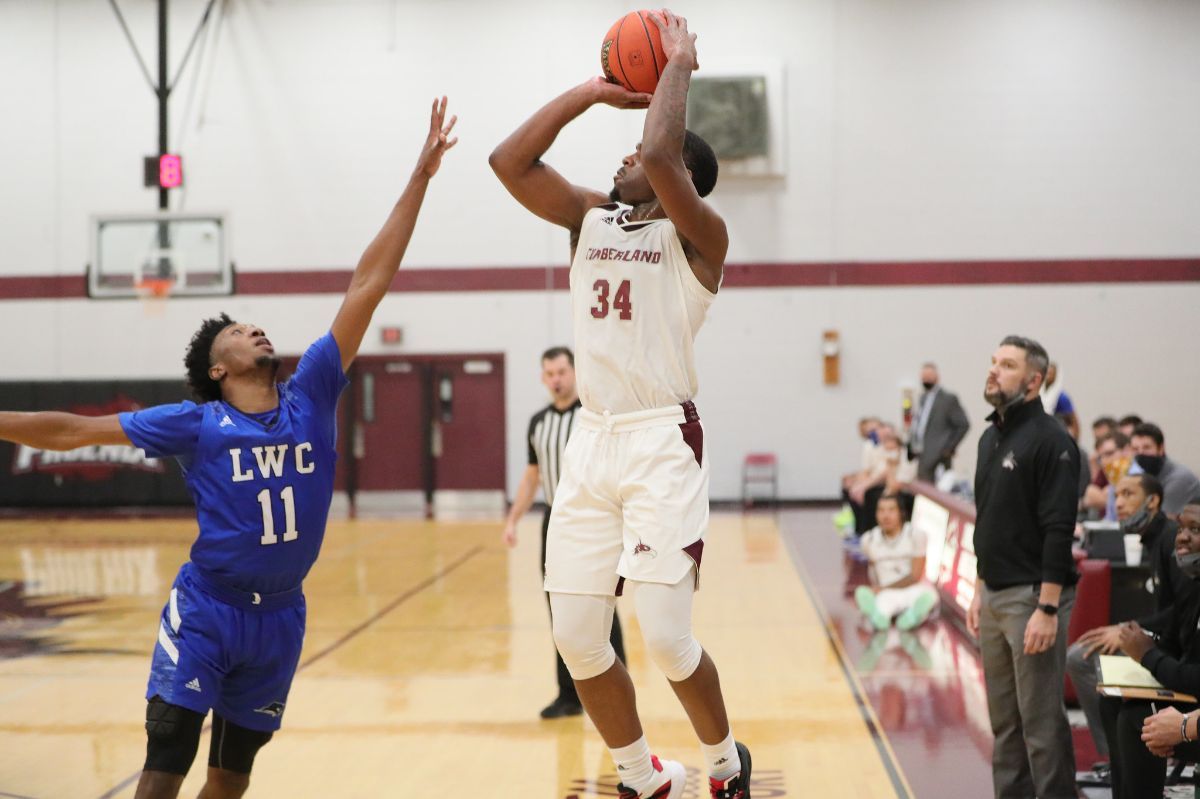 CRESTVIEW HILLS, Ky.--Cumberland shuts down a red-hot Thomas More team on the road with a hard fought 61-57 win at the Connor Convocation Center on the campus of Thomas More University Thursday evening.

The Phoenix held a 47-45 lead with 11:08 to play when Tyler Byrd knocked down back-to-back three-pointers with a Saints basket mixed in between on ensuing possessions. Thomas More followed that with a 6-0 run off a free throw, a two-point basket by Garren Bertsch and a triple from Reid Jolly to tie the game at 53-53 with 7:01 to play.

After two minutes of back and forth action without a point, the Saints scored on a layup from Logan Swackhammer, but Byrd answered it right back with a step-back 18-footer to tie the game. Aaron Ridley gave Cumberland the lead with a tough two-pointer with 3:35 to play and Byrd again extended the lead with a jumper from the elbow.

Ryan Batte got one to go in the lane after the Saints press forced TJ Stargell to throw it away in the backcourt with 27 seconds left. Thomas More forced another turnover on the inbounding forcing Stargell into a backcourt violation. Trailing by two and the Saints with the ball Jolly got Stephens off of his feet, but Jolly tried to bounce it around Stephens to Batte and Stargekl was there to intercept it with 14 seconds left.

The Saints had a few fouls to give before they would be sending anybody to the line, so they tried to get the steal off of two inbound plays before finally sending none other than Tyler Byrd to the free throw line with 2.9 seconds. Byrd iced the game with the only two points he got from the charity stripe allowing Cumberland to steal the game on the road.

Cumberland saw big production from junior Tyler Byrd with 26 points on the game including 15 of the team's final 17 points down the stretch. Byrd was in a shooting slump headed into the game shooting 2-19 from the field and scoring a combined six points in the Phoenix losses to Georgetown and the Cumberlands, but busted that wide open with six three balls on the game.

TJ Stargell scored 11 points on 5-of-10 shooting and forced the biggest turnover of the game with six seconds to play. Tavon King had his 11th double figure scoring game of the season with 11 points on 5-of-9 shooting adding seven rebounds. Aaron Ridley posted nine points and grabbed five boards and Isaac Stephens scored three points with seven rebounds, but did a great job defending the paint.

Cumberland (6-6, 5-5 MSC) shot 46.2% (24-of-52) from the field and hit nine three-pointers, six from Byrd. Cumberland outrebounded Thomas More 32-26 including seven offensive boards, but could only capitalize with one second chance point. The Phoenix only got to the free throw line eight times, hitting 50% of them.

Stephens and King scored the first four points for the Phoenix, but Thomas More was able to jump out to an 8-4 lead forcing Cumberland into a timeout after five minutes.

The timeout proved to be well worth it as the Phoenix used a 7-0 run to take an 11-8 lead after King buried a three and picked the Saints pocket for a fastbreak two. Ridley added a tough layup in the paint, but back-to-back threes from Batte and Rudy gave TMU a 14-11 lead and Jolly scored in the lane for a 8-0 run for the Saints.

After slow back and forth action that saw the Saints lead 21-15, Byrd came to life with five straight points for the Phoenix after a jumper from the elbow and a corner pocket three. Cumberland forced a turnover and Stargell got out in front of everyone for two points on the dish from Jaylen Negron. The Saints kept pace hitting a three to stay up by six 28-22 with less than three minutes in the first half.

The Phoenix stormed back in the final three minutes of the half to knot the game at 32-32 off a three from Stargell to tie it at the horn.