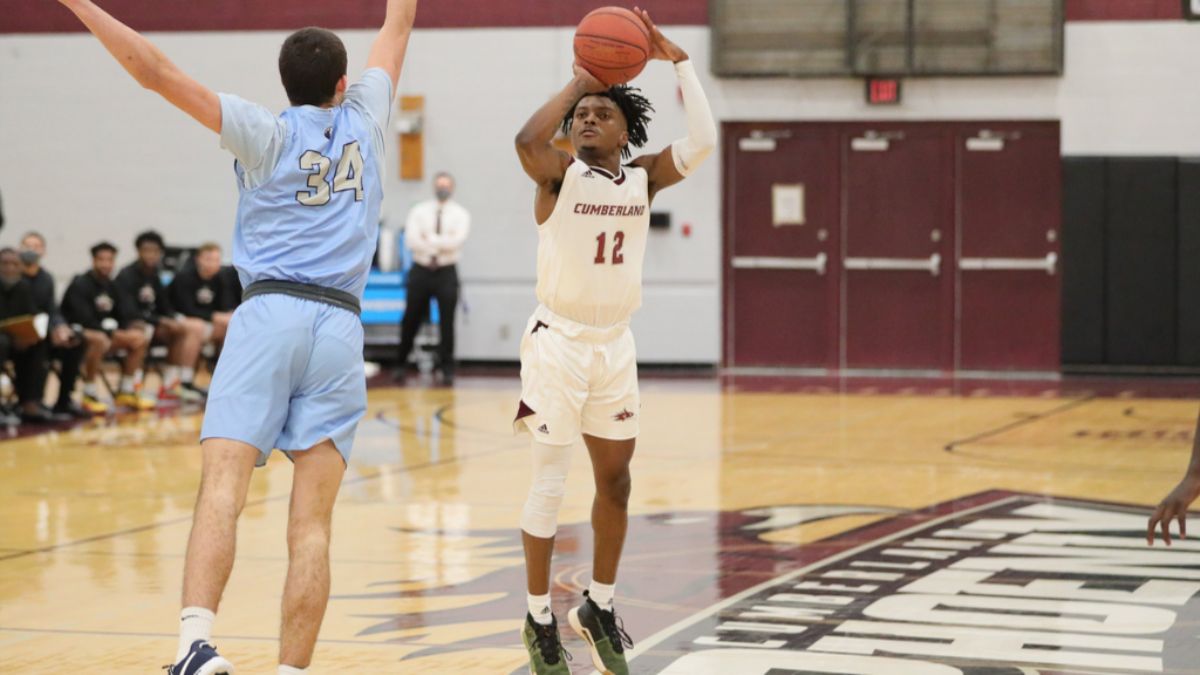 Tavon King had a game-high 17 points in the come-from-behind win over Reinhardt. (Credit: Steve Wampler)
Cumberland at Reinhardt | November 04, 2021

WALESKI, Ga.--Cumberland men's basketball set a program-record making 15 three-pointers in a come-from-behind victory on the road over Reinhardt University 82-58.

Cumberland (3-0) trailed by 13 at the half and by 12 with 11 minutes to play, but 12 second-half triples helped them rally from behind to get the win. The Phoenix posted 57 points in the second half after a sub-par first half. Cumberland ended the game shooting 25-of-65 from the field and 15-of-29 from three. Cumberland made 28 trips to the charity stripe making 17 free throws.

Tavon King led the Phoenix in scoring with 17 points in 28 minutes. King drained three triples and had a team-high six assists and three steals. Aaron Ridley in his first game of the season was two rebounds away from a double-double posting 14 points and eight boards. Jordan Stephens notched 13 points and Tyler Byrd had 12 with three three-pointers. TJ Stargell put up 11 points for five Phoenix in double figures.

Kristian Collins and Jalin Wimberly led the Eagles in points with 12 and 10. Derrick Lampkin had a game-high nine rebounds. Reinhardt scored half of their points in the game off the bench and in the low block area.

Cumberland jumped ahead in the first five minutes of game action as the Eagles could not get a shot to fall to let CU get up 10-3. With the Phoneix up 18-13, Cumberland went into a scoring drought allowing Reinhardt to take advantage of a 13-0 run to take a 26-18 lead. When CU got back on the board they covered it slowly with just free throws until they reached 22 points. Kelvin Jackson finally got a jumper to fall to snap 10 minutes of game-time with a field goal. Cumberland would trail 38-25 at the break.

Out of the break, Cumberland's first four buckets were three-balls to inch back into the game. A layup from Isaac Stephens and a free throw from Ridley cut it to 46-40 with 15:02 to play.

Reinhardt worked it back to a 10-point lead, 52-42, with 11:39 to go. Cumberland then used another onslaught of triples on a 15-0 run to capture the lead. Cumberland would keep the throttle down and extend it to a 10-point lead in a matter of moments as Tyler Byrd made a four-point play, hitting three while being fouled.

Reinhardt would just get two more points in the final five minutes as the shooting performance by CU drained the Eagles. Cumberland would go on to win 82-58.

The Phoenix will take on Murray State on Tuesday, November 9 in an exhibition match with the Racers. Tip-off is set for 7:30 p.m.