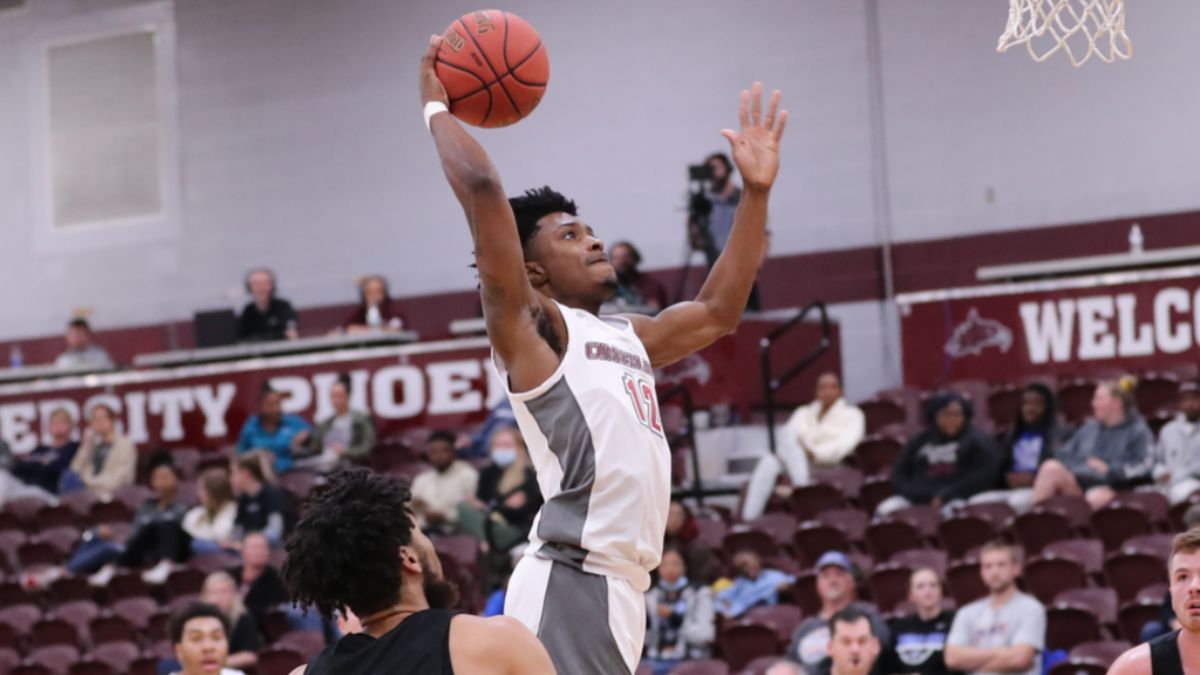 Tavon King threw down a monster slam in the first half of the loss against No. 16 Thomas More. (Credit: Bob Tamboli)
Thomas More at Cumberland | December 02, 2021

Ryan Batte drained a fade away jumper from 17-feet on the baseline to give Thomas More a 72-70 lead with just one second . Cumberland used a halfcourt pass and took a timeout with 0.6 seconds on the clock and drew up a play for Aaron Ridley who fired a three that rattled in and out. No. 16 Thomas More escaped Lebanon with a two point victory.

"We drew it up out of the timeout. Aaron got a really good look, he let it go, and we all thought it was in. It touched every part of the rim," head coach Jeremy Lewis said.

"You couldn't ask for a better college basketball game. That is a really good team and our guys gave us everything they have."

Cumberland (5-2, 1-2 MSC) showed everything they had against a top team in the NAIA and just fell short. The Phoenix shot 48.3% from the field and buried 11 three-pointers. CU struggled to get to the line tonight hitting just 3-of-6 free throws, but the Saints made it hard for Cumberland to get downhill and drive to the basket.

Stargell started the game off by burying two three pointers to give Cumberland a 6-3 lead early on. After Batte made a jumper, King threw down a monster one-handed slam to make it 8-5 heading into a timeout.

Tied at 12-12, King caught fire and single handedly went on a 8-0 run for CU. He started it by going coast-to-coast for two and drained back-to-back threes. Thomas More responded with a 5-0 run on a layup from Noah Pack and a three from Vieth to cut it to 20-17.

Leading 25-19, the Saints got back-to-back threes from Vieth and George and Batte hit a jumper in the lane to give TMU a 27-25 lead and force the Phoenix into a timeout.

After back and forth play the remaining five minutes, Garren Bertsh hit a buzzer-beater three at the half to give Thomas More a 39-37 lead at the break.

The Phoenix answered the call with a three by Ridley and a layup by Tyler Byrd to cut it to 68-66. After Batte hit two free throws, Ridley put in an offensive putback and King made two-of-two from the line to tie it with 1:08 on the clock.

Both teams got a stop defensively and Batte drained the fadeaway shot from the baseline with one second left to hand Cumberland their second conference loss of the season.

Cumberland will remain at home on Saturday to take on No. 21 Shawnee State at 4:00 p.m.