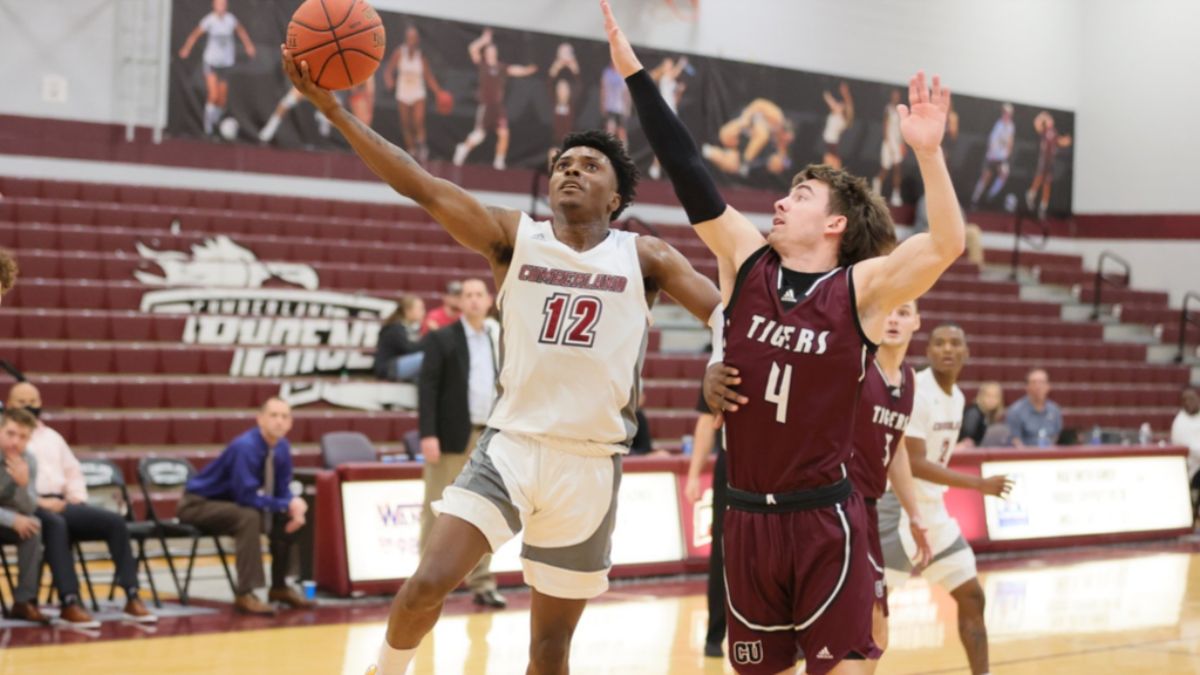 Tavon King converts a lay up in the big win over Campbellsville. (Credit: Steve Wampler)
Campbellsville at Cumberland | December 16, 2021

Cumberland (8-2, 3-2 MSC) jumped out to a quick 5-0 lead after Isaac Stephens got on a offensive board and putback for the first points of the game. Ridley made a two and Stargell hit one-of-two from the line. Campbellsville andswered with five straight points themselves after a three from Weining and two from Broughton.

Tied at 8-8, CUmberland went on a big 10-0 run over the next two minutes with threes from Ridley and Byrd. Cumberland would push the lead out to 11 and maintain it until 3:30 left in the half when the Tigers stormed back into the game. Jarius Key made a two and a three and Jace Wallace scored on a putback. Darius Harding buried a triple to cut it to one, but as the horn sounded King drained a jumper to take a three-point lead into halftime, 39-36.

Phoenix came out of the half quickly with a 7-0 run as Isaac Stephens converted an and-one and a jumper and Nassir Coleman had an easy putback to force the Tigers into a timeout.

Cumberland kept the pressure on and in three minutes pushed it out to 12 minutes on a layup from Jackson a fastbreak slam by Byrd and jumper from Jackson to lead 54-42.

The Phoenix would push it out to as much as 20 before coasting to victory to snap a eight-game losing streak to Campbellsville, 77-61.

King led all scorers with 18 points on 7-of-9 shooting. Isaac Stephens was one rebound shy of a double-double with 16 points and nine boards. Tyler Byrd scored 15 points on 7-of-11 shooting and Kelvin Jackson scored 13 on 6-of-11. Nassir Coleman led the team in rebounds with 10.

Cumberland will be back at home on Saturday against No. 21 Georgetown. Half of the ticket money will go towards tornado relief in Bowling Green.