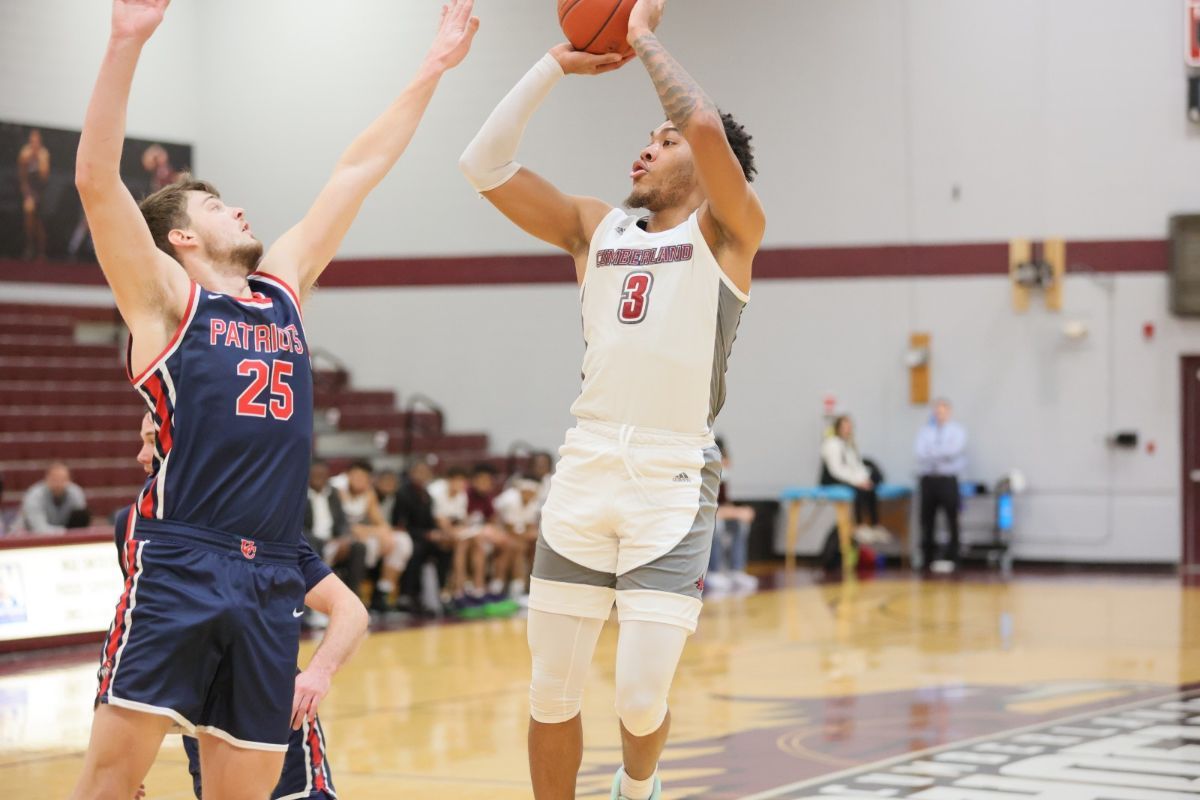 Aaron Ridley posted his second double-double of the season in the win over the Cumberlands. (Credit: Steve Wampler)
Cumberlands at Cumberland | January 15, 2022

LEBANON, Tenn.--Cumberland men's basketball held off a late surge from the University of the Cumberlands to win 71-63 at the Dallas Floyd Phoenix Arena Saturday evening.

Cumberland (10-4, 5-4 MSC) shot the ball efficiently at 46.4% from the field, but still struggled beyond the arc making 5-of-18 three-pointers. The Phoenix controlled the boards picking up 38 rebounds, seven more than the Cumberlands.

Aaron Ridley posted his third 20 point game of the season and second in three games scoring a game-high 22 points on 7-of-10 shooting. He also picked up his second double-double of the season leading the Phoenix in rebounds with 10.

Tyler Byrd scored 12 points off the bench in just 23 minutes and Tavon King posted 10 points for his 12th double-figure game this season.

The Cumberlands (12-6, 6-4 MSC) went 22-of-55 from the field and made eight three-pointes. Steven Fitzgerald led the way for the Cumberlands with 19 points. Jahi Hinson finished right behind him with 17 points. Lamar Harris posted 12 points and five rebounds.

The first six minutes was back-and-forth action where both teams battled to a 12-12 score. The Patriots were able to build up a three-point lead off at 19-16 before Cumberland went on a 7-0 run. Over the run, Ridley scored five and Coleman scored on a putback to lead 23-19 with 6:59 left in the first.

The Phoenix would push the lead out to six at 27-21 before Hinson hit back-to-back shots to cut into the Phoenix lead at 27-25. Ridley scored one last basket in the last minute and Jordan Stephens made a coast-to-coast layup for a halftime score of 31-25.

Cumberland came out of the half and went on a quick 10-0 run as Ridley hit two threes and King got a jumper to fall for Cumberland's largest lead of the game 41-25.

The Phoenix held on to a 10-point lead until the eight minute mark when JJ Ramey got a three  to fall for the Patriots to spark a 7-0 run and cut it to 60-55. The Patriots would get it as close as 64-62 after a barrage of free throws from both sides, but Cumberland stepped up in the closing minutes and got stops when needed to hold on for the 71-63 win.

The Phoenix will hit t he road next Thursday to take on defending NAIA National Champion Shawnee State in Portsmouth, Ohio. Tip-off is set for 7:00 p.m.