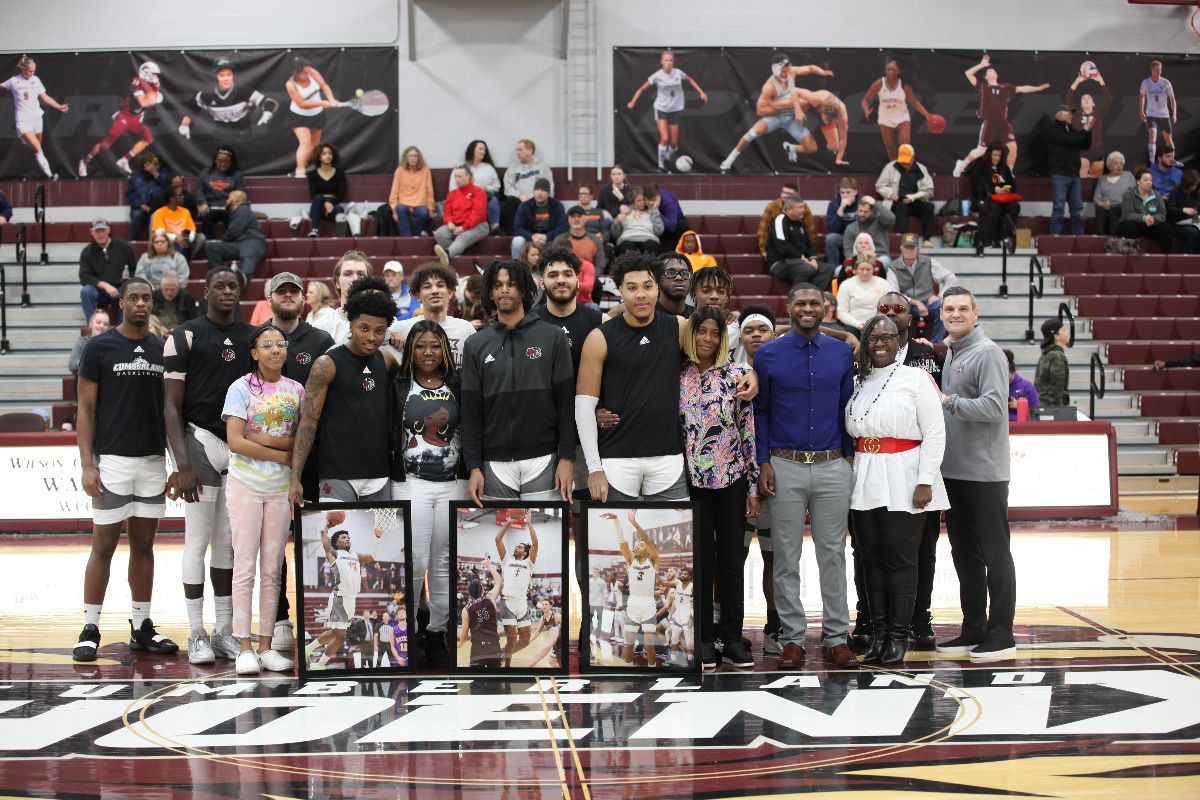 The Cumberland MBB Seniors and their families during the pre-game festivities (Credit: Daniel Holmes)
Tennessee Southern at Cumberland | February 19, 2022

The Phoenix were on fire out of the gates as they went up 17-0 after the first five minutes of play. Cumberland attacked Tennessee Southern in the half-court and the transition game during the scoring run. Tavon King had ten of the 15 points in the Cumberland run. Tyler Byrd drained a three-pointer at the ten-minute mark to lead 24-8.

With just over 6:30 to play in the first half, Aaron Ridley made his presence felt with a driving layup to give CU a 22 point lead at 33-11. TJ Stargell kept it going on the offensive end with a big three at the 3:35 mark and played great defense on the other end to stifle the Firehawks. Cumberland went into the half with a 43-17 lead over the UT Southern after back-to-back hard-earned buckets in the paint by Isaac Stephens.

The Phoenix ended the half with an impressive field goal percentage of 51.5 (17-33) and 45.5 percent (5-11) from three-point land. CU made sure to give the Firehawks a challenge on the defensive side of the ball as they held them to 17 points and 22 percent (6-27) from the field in the first half.

The Phoenix also got it done on the glass, outrebounding the Firehawks 23-15 while only turning the ball over four times.
Tavon King led all Phoenix scorers with ten points at the half on 4-8 shooting from the field. Nassir Coleman had an impressive first-half performance on the glass as he went into the break with eight rebounds, along with two assists.

The Firehawks made a bit of a run to start the second half, as they cut the Phoenix lead to 49-31 after the first four minutes of play. Isaac Stephens put an end to that run with four more hard-earned points in the paint to give the Phoenix a 23 point lead at 55-32 with 13:58 left to play.

Byrd hit three-pointers on two straight possessions to give the Phoenix a 71-43 lead at the nine-minute mark. Jordan Stephens came off the bench for Cumberland and rattled off ten straight points, including two three-point plays to add to the lead and make it 83-56. Cumberland went on to cruise to a 96-68 win over RV Tennessee Southern.

Cumberland ended the game with a whopping 61.3 (38-62) shooting percentage from the field and 47.6 (10-21) percent from three. Over their last four games, Cumberland has shot 50 percent or better from the field while also winning those games by 19 points or more. Tennessee Southern had a much better second half as they scored 51 points, but they still ended up being outscored by CU 53-51. The Phoenix also outrebounded the Firehawks 36-30.

Five players ended the night in double figures for the Phoenix. Tavon King led the way with 19 points, followed by Isaac Stephens with 17, Tyler Byrd with 15, Jordan Stephens with 14, and TJ Stargell with ten points. Nassir Coleman ended the night with a team-leading nine rebounds, followed by Stargell with eight rebounds and a team-leading four assists and three steals.

With the win, Cumberland ends the regular season with 20 wins for the first time since the 2011-12 season when CU ended with a 22-9 record. The team earns a bye in the opening round of the Mid-South Conference Championships and advances to the next round in Bowling Green, Ky., as the No. 4 seed.

The Phoenix next game will be Saturday, at 3 p.m. at Bowling Green High School against an opponent based off the result of the MSC Opening Round Games.