March 11, 2022 at 5:00 PM
Hawkins Student Activity Center
Attendance: 0
Recap Boxscore
Phoenix cruise past WVU-Tech to advance to Round of 32 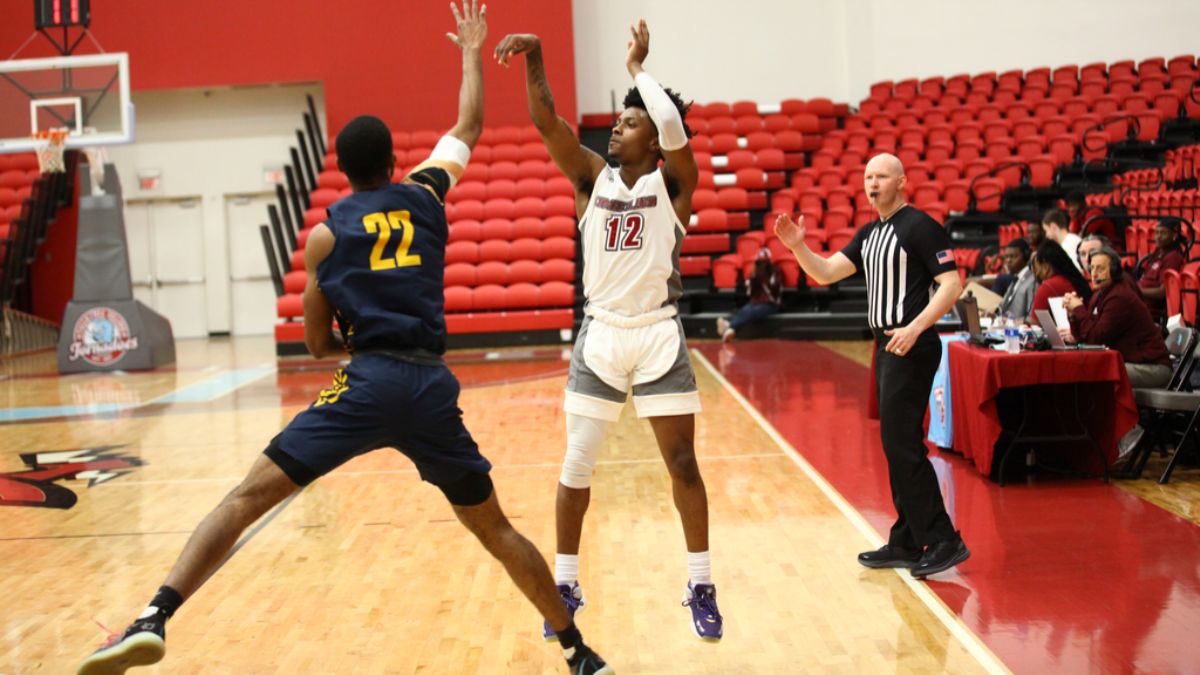 TALLADEGA, Ala.--Cumberland men's basketball wins their first NAIA National Tournament game in 18 years with a 79-65 win over West Virginia Tech to advance to the Round of 32 tomorrow night.

Cumberland (22-8) jumped up quick and maintained a 10-point lead for the entirety of the game to move on to the next game in the NAIA National Tournament. The Phoenix shot 47.0% from the field and hit seven three pointers all in the first half.

Senior guard Tavon King was exceptional out of the gate as he went for a game-high 21 points. King posted 15 at the half on four made threes. Isaac Stephens scored 16 points on 8-of-10 shooting with eight boards.

West Virginia Tech (26-6) tried to match the Phoenix's size and athletism and played a 2-3 zone all game that Cumberland exploited early. The Golden Bears shot 43.3% from the field and also made seven three-pointers.

Cumberland jumped out of the gate quickly with a 10-0 run. On the spurt, Stargell buried a three from the corner to start the game, Ridley scored the next six point with a three, a two-point jumper, and one free throw, and King scored his first point of the game from the line.

The Golden Bears made a two to stop the run, but King came to life in the first half as he answered with his first three of the game. Tech big man Juvante Hayes scored on an offensive board, but King again drilled his second triple to get up by 12, 16-4 at the first media.

Tech went on a 5-0 run as Parker through down a big slam and Jonnson buried a triple. Jordan Stephens answered with a triple on our end to keep it at nine. Another 4-0 run by the Bears brought it to as close as five points, but a big 10-2 run by the Phoenix gave CU their largest lead of the first half at 13 points with five minutes left in the half.

The Golden Bears buried three three pointers in the final five minutes, but King hit two more as well to give Cumberland a 40-30 lead at the intermission. King finished the first half with 15 points on four made three pointers.

The Phoenix managed the 10-point lead until the 14-minute mark when Cumberland went on a 8-0 run as Isaac Stephens made a layup, Nassir Coleman heit a jumper, Tyler Byrd hit two free throws, and King capped it with a two.

Cumberland was able to get up 20 after that run right at the 10-minute mark. The Golden Bears went on a spurt to cut it to 13, but the Phoenix lead was to large as the cruised to a 79-65 win.

Cumberland will take on Talladega tomorrow at 5:00 p.m. with a trip to Kansas City on the line.