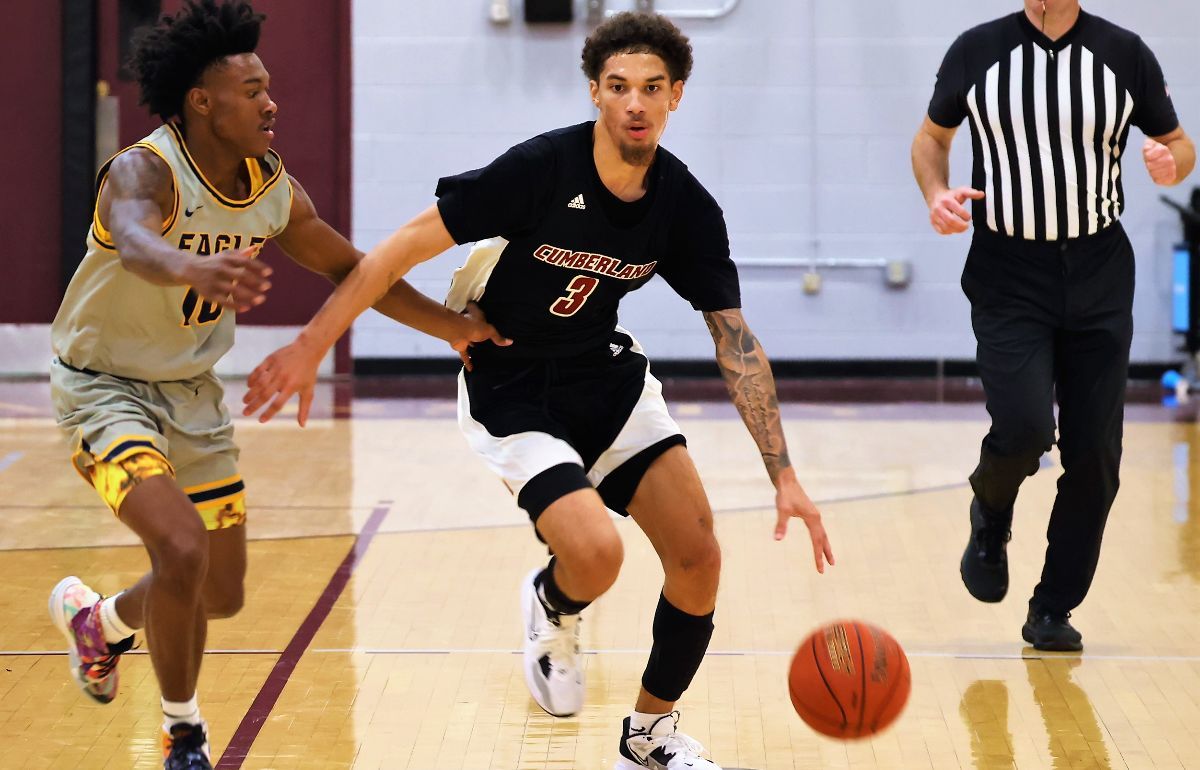 Jaylen Negron had a big game off the bench stepping up to score 14 points in the win in the season opener over Reinhardt.
Reinhardt at Cumberland | November 01, 2022

LEBANON, Tenn.--Cumberland men’s basketball opens the season with a big win over RV Reinhardt, 76-71. The Phoenix had control of the first half, but a late run by the Eagles forced CU to gut out a big win at home.

Cumberland (1-0) led by as much as 15 in the first half, but Reinhardt never went away and fought back to make it a one possession game. The Phoenix made plays down the stretch to come out with the victory.

“We got off to a great start tonight, defensively we were just electric. We hit a wall late in the first half, they jumped up and made some shots and we went stagnant. I thought they had a good game plan and ultimately it was really good for us to be in a dog fight like this early in the season,” head coach Jeremy Lewis said.

Jaylen Negron had a big game off the bench leading Cumberland in scoring with 14 points. Jordan Stephens and TJ Stargell each added 13. Nassir Coleman had nine points and seven rebounds. Isaac Stephens finished with nine points and a game-high 10 rebounds and Ty’Reek Johnson scored nine points in just 21 minutes while battling foul trouble.

The Phoenix shot 47.5% from the field and made 5-of-18 three pointers. The Phoenix defense forced 23 turnovers by the Eagles in the game.

Reinhardt (0-2) went 25-of-49 from the field shooting 51.0% and made eight threes, but the turnovers hurt Reinhardt in this game. Jalin Wimberly led all scorers with 21 points while Tyler Smith added 17 and Nate Louis scored 14 off the bench.

Jordan Stephens started the party early with back-to-back twos to give CU an early edge. Reinhardt scored two buckets of their own including a triple from Wimberly to go up by one. The Phoenix would then go on a 7-0 run with a three from and a basket from Johnson to force the Eagles into a timeout trailing 11-5 with 15:09 left in the half.

Stargell heated up after that timeout scoring three straight baskets on two jumpers and a three from the corner to put Cumberland up 18-7. The Eagles would add a layup to make the score 18-9 at the first media timeout.

The Phoenix would extend the lead out to 15 over the next six minutes as Cumberland went on three different 4-0 runs to make the score 29-14 with 5:54 left in the half.

Over the next two minutes, Reinhardt would score two baskets from Tafari Thomas and Tyler Smith forcing Cumberland into their first timeout with 4:05 left leading 31-20.

Reinhardt continued that momentum and went on a run, drawing three three pointers in the final two minutes to get within six at the break, 39-33.

The Eagles would ride that momentum out of half for a 7-1 run to tie the game at 40-40 after just two minutes.

Tied at 54-54, Cumberland went on 9-0 run as Negron hit a jumper, Fraley buried two free throws, and Stargell hit a jumper to push CU up 60-54. After a few back-and-forth possessions without scoring Negron drained a three to push it to 63-54 with 7:37 left.

The Eagles had no quit as they battled back to make it a two possession game as they knocked down contested shots to cut the score all the way to 70-65 with 3:06 left.

The score got as close as 74-71 after a two from Wimberly with 31 seconds left, but the Phoenix knocked down two free throws and held off Reinhardt at the end for the 76-71 final.

Cumberland will be back at home this Friday to take on Bryan College. Tip-off is set for 7:00 p.m.