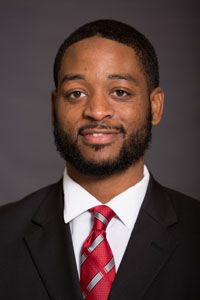 Former Cumberland point guard Lindal Yarbrough begins his fifth season on the coaching staff at his alma mater in 2017-18. He is responsible for recruiting, scouting, film breakdown, day-to-day preparation and player development.

The Phoenix posted a 14-13 mark in his first campaign on the coaching staff with a roster that included 10 newcomers. The squad struggled to nine victories in 2014-15 but has recorded 12 wins in each of the last two seasons.

The Nashville, Tenn., native attended Middle Tennessee for two-plus years, redshirting one season and playing in nine games for the Blue Raiders before transferring to Cumberland in January 2010. He helped the Phoenix to nine wins while starting the final 16 games of the 2009-10 season, averaging 8.2 points, 4.3 assists and 1.6 steals per contest.

During his senior campaign he was voted Preseason All-TranSouth Conference and averaged 7.0 points and a team-best 2.9 assists per outing with an assist-to-turnover ratio of 1.1. He played in all 30 games with 24 starts, as the Phoenix posted an 18-12 mark, including 11-5 in the TranSouth.

Yarbrough graduated from Hunters Lane High School in Nashville, leading the Warriors to the Class AAA State Tournament as a senior for coach Anthony Sewell. He earned All-Region honors as a senior and played his final two years at Hunters Lane.

He attended College Heights Christian Academy in Gallatin, Tenn., as a freshman and sophomore, helping the club to back-to-back state championships and garnering All-State Tournament accolades as a sophomore.

Yarbrough received his bachelor’s in Business Administration from Cumberland in 2012.