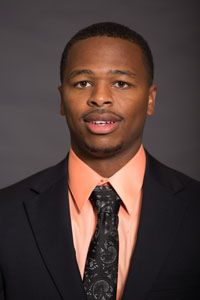 Cameron Prather begins his first season as a graduate assistant on the Cumberland staff after completing his career with the Phoenix.

The Nashville, Tenn., native redshirted his first year on campus before playing in 20 games with one start in 2012-13. He netted six points against Shawnee State, hitting a pair of 3-pointers, and scored four points apiece in three other games while averaging just 8.9 minutes per outing.

As a sophomore Prather started twice and saw action in 15 total contests, posting 10 points versus Bluefield College and six against Mid-Continent University. He started six times in his final season as a player in played in 25 total games, averaging 5.4 points and 13.1 minutes per outing. Prather registered a career-best 16 points versus Fisk University, 13 with three 3-pointers against Campbellsville University and 13 at St. Catharine College.

Prather was a three-time Mid-South Conference Scholar-Athlete and received his bachelor’s in Sports Management from Cumberland in 2015. He is currently enrolled in the master’s program for Business Administration at CU.