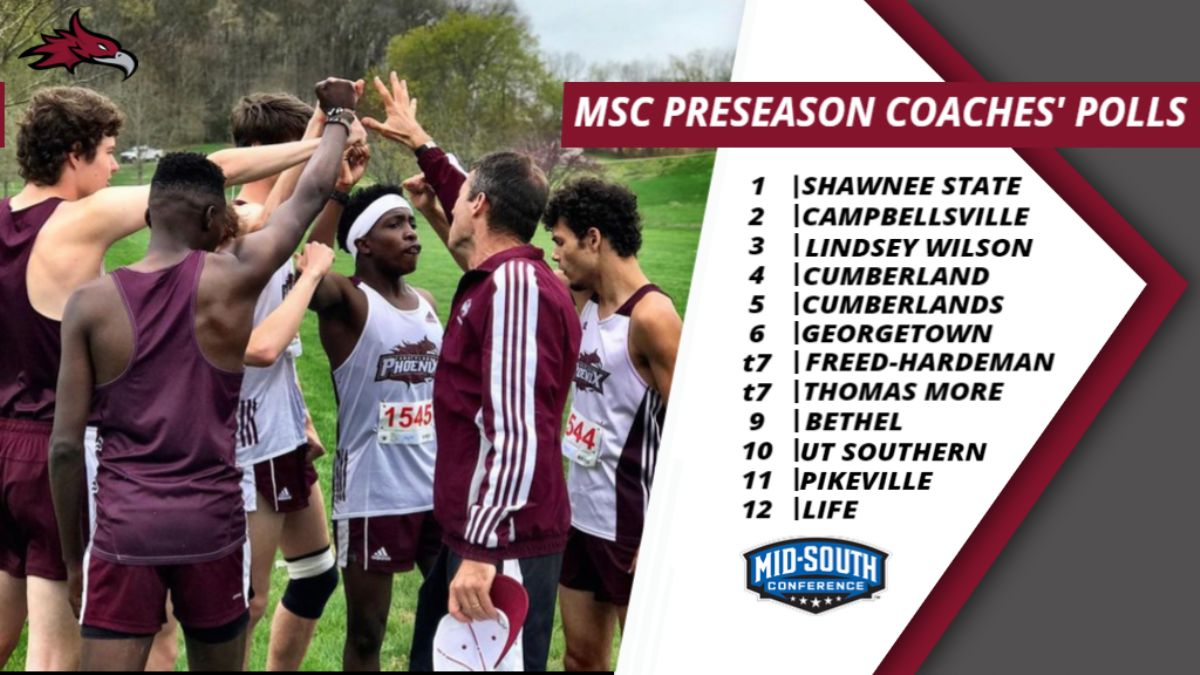 Kipligat efforts at the conference tournament earned him a spot at the NAIA National Championships where he set a personal best with a time of 25:58 for 80th place. Kipligat has qualified for nationals in the two seasons he has spent at Cumberland. Rhoden just missed the cut in making the National Championship last season, but that doesn't take away from the stellar start to his career. He took home a second-place individual finish at the RedHawks Last Chance 5K and posted his best time at the UAH Chargers XC Invite with a 27:12.64.

Also returning is three-time Mid-South Conference Second Teamer and National Qualifier in 2018, Joel Barlow. He holds 12 of the Top-25 All-Time program-best times in the 8K race including three out of the Top-5. Barlow is the lone senior on a team chock-full of talented underclassmen.

Aiden Crockett and Andrew Cullins are returning for the second season with the Phoenix. Crockett posted a 26th place finish in the Conference Championships last season but had his best time of the year at the 'Live at Lou' Cross Country Classic in Louisville with 27:49.2. Cullins best time of the season last year came in his first collegiate meet at the UAH Chargers XC Invite.

Cumberland is bringing in newcomers Nickson Kipkosgei, Jacob Harzbecker, and Alex Kogo. Harzbecker is a Lebanon native and attended Wilson Central High School. He earned four varsity letters in cross country and was a district champion in track. Kipkosgei is a freshman coming from Kenya. Coach Jim Seckel's remarks about him at the time of his signing was, "He gives us an additional front runner that will compete with the top echelon runners in the conference."

Shawnee State (Ohio) has been selected as the favorite to win the 2021 Mid-South Conference Men's Cross Country Championship.

The Bears received 121 voting points in the preseason poll, including 11 of the 12 first-place votes. Shawnee State finished as the top team in the conference last season capturing the program's fifth consecutive MSC championship and their 10th in the last 11 years.

Campbellsville (Ky.) is second in the poll with 108 voting points and the final first-place vote. Lindsey Wilson (Ky.) received 96 voting points to finish third in the preseason poll while the Phoenix landed at fourth with 91 voting points.

Cumberlands (Ky.) garnered 74 points for the fifth spot in the poll with Georgetown (Ky.) gathering 73 voting points to place sixth. Freed-Hardeman and Thomas More each received 56 points to tie for seventh in the poll. Bethel (Tenn.) is ninth with 41 points.

Tennessee Southern was tabbed 10th in the poll with 39 voting points. Pikeville (Ky.) and Life (Ga.) round out the poll in 11th and 12th respectively. The Saints received 20 points with the Running Eagles receiving 17.