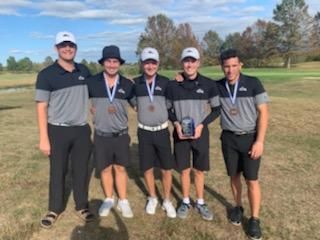 The Phoenix ran with the top spot throughout the tournament, relying on excellent performances from all five of the competing players. Cumberland continued to receive top level play from young players, three of them placing in the top five of the individual leaderboard.

Freshman, Isaac Walker led the way for the Phoenix, registering a one-under 71 in the second round to end the tournament at even par. The round that only saw two bogeys before earning three birdies was enough to move Walker up from a tie for fifth day one to second place today to finish the tournament.

Adrian Steeger moved up one spot on the second day to tie for fourth with a two-over, 74. Outside of a double bogey that the sophomore carded towards the end of his day on the long, par-five 14th, he was even on the day with two bogeys and two birdies on the front.

After tying for first day one with a one-under 71, freshman Tomi Acotto shot a four-over, 76, to fall into a tie for fourth. Starting on hole two due to a shotgun start on the day, Acotto sat at even-par on the day with three holes to go to clinch a share of the lead with Lindsey Wilson’s Callum Blinkhorn, but a double bogey on 17 followed by bogeys on 18 and 1 pushed him back.

Reece Gaddes finished his best tournament of the season with a four-over 76 to finish just outside of the top-ten, tied for 11th. After recording four bogeys through his first eight holes, Gaddes calmed down shooting even-par with one bogey and one birdie the other eleven holes.

After a strong day one to place in the top-15, Bryson Smith had a rough final day, carding three double bogies on his way to a 13-over 85 and a tie for 40th place.

The men’s golf team’s next tournament is Vonore, Tenn., at the Kahite Golf Course for the Bojangles Tennessee Intercollegiate this coming Saturday and Sunday.