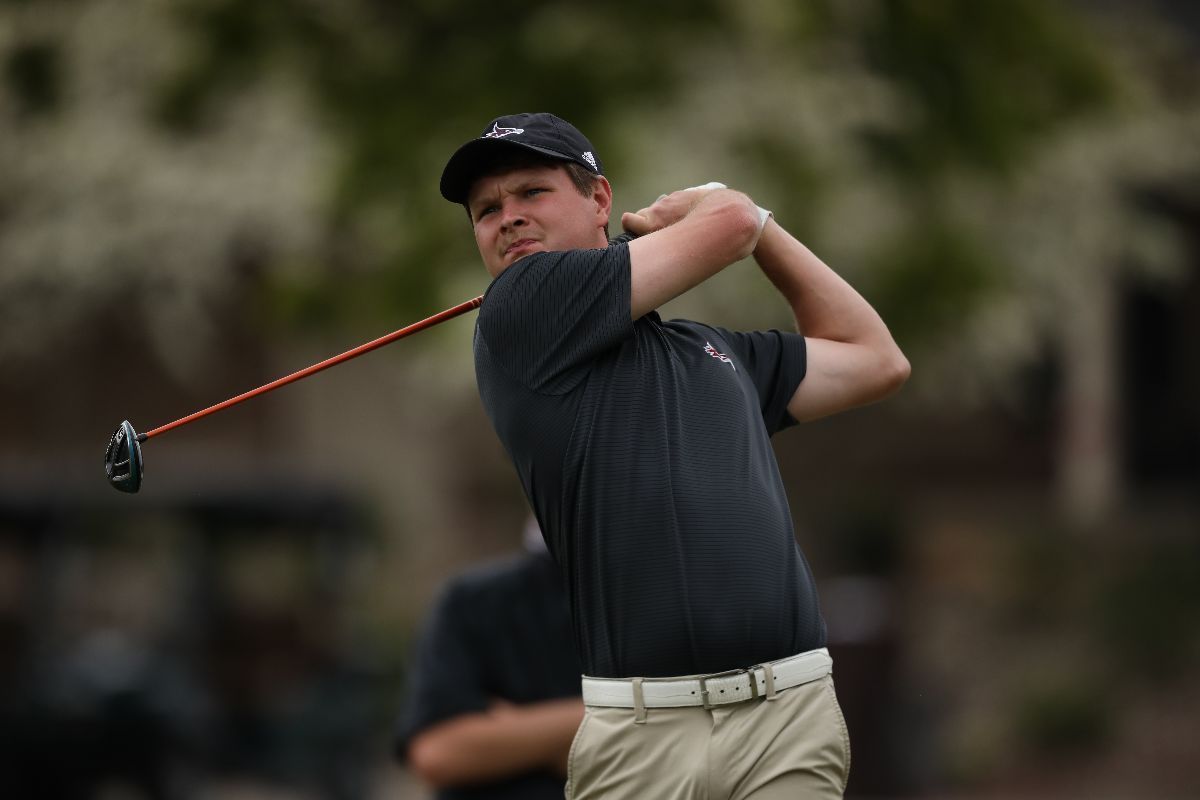 Isaac Walker shot a one-under-par in the third round at TPC Deere Run. (Credit: Jordan Alves)

SILVIS, Ill.- Cumberland men's golf tied their season-low mark with a 288 to move up the leaderboard to No. 7 in the 69th Annual NAIA Men's Golf National Championships at TPC Deere Run.

On day three the field was cut down to the Top-17 teams and the Top-40 individuals. Cumberland was paired to play with Embry-Riddle and the individuals that qualified in the Top-40. The groups went off on No. 10 starting at 7:39 a.m. The Phoenix played with their third different lineup of the tournament today and all five players had strong showings to help the Phoenix.

"We had a really great day. They remind me of the girls run in 2019. The boys are having fun and playing really good golf. I'm really proud of them and the program," said at golf coach Rich Williams.

Cumberland jumped up eight spots in the team standings to tied for seventh. Dalton State jumped into first place while Point remains in second  Keiser slips one spot to third and Texas Wesleyan falls from first to fourth.

Isaac Walker continues to play better each day carding a one-under 70 in the third round. Walker started with par-bogey-par on the first three holes before a stretch of the three birdies, a par and a bogey over the next five holes for one-under on the first nine. Walker fired two pars and a birdie on No. 3 before a bogey on No. 4. He bounced back on No. 5 with a birdie but bogeyed No. 9 to close his round at a one-under. Walker is at 220 through three rounds.

Bryson Smith started his day with a bogey on No. 10, but picked his play up after that. Two pars and a birdie on No. 13 got him to even. Smith bogeyed No. 16, but an eagle on par-5 No. 17 put him at one-under through the first nine holes. Smith opened the front-nine with a bogey but recovered with a birdie on No. 2. Smith posted a double bogey and a bogey on No. 4 and No. 6 and finished his day strong with a birdie-birdie finish. He finished the round at even par and is at 223 after 54 holes.

Steeger carded two birdies and two bogeys on the back to shoot even on the first nine. On the front, Steeger fired three straight pars to start the front. He slipped with a bogey on No. 4, but picked the stroke back up with a birdie on No. 6. The sophomore finished bogey-birdie-bogey to shoot a one-over-par 72. Steeger is at 54 hole score of 221.

Will Samuelsson bogeyed his first hole of the day but responded well with a par on No. 11 before back-to-back birdies on No. 12 and 13. The freshman posted a double bogey on No. 16, but ended the first nine with two pars for a one-over. Samuelsson struggled on the front-nine posting four bogeys and two double bogeys to finish with an 80.

Reece Gaddes started his day strong with a birdie on No. 10. Back-to-back bogeys on No. 13 and 14 put him at one-over through the front nine. A birdie on No. 2 brought him back to even. The junior carded a bogey on No. 4 and posted three straight pars, but a bogey and double bogey on No. 8 and No. 9 ended his round at four-over-par with a 75.