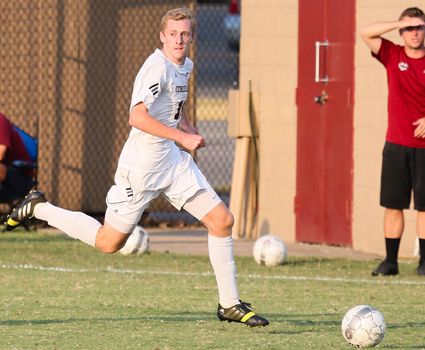 Tom Reilly netted the game-winner for the Bulldogs in overtime in Saturday's 2-1 victory over the University of the Cumberlands. (Credit Steve Wampler)

LEBANON, Tenn. – Tom Reilly scored in the final minute of the first overtime, giving Cumberland its first victory in extra time this season in a 2-1 win over the University of the Cumberlands in the quarterfinals of the Mid-South Conference Men’s Soccer Championships on Saturday in Williamsburg, Ky.

The Bulldogs (6-12-1) advances to the tournament semifinals Thursday against the winner of Saturday night’s Lindsey Wilson-Shawnee State match. It marks the second straight year CU has won a match on the road in the tourney quarterfinals after defeating Campbellsville University in 2012.

Harry Mason’s goal, his 17th of the season, in the 78th minute tied the match for Cumberland before Reilly netted his fourth goal of the year in the 100th minute.

Pedro Antonelli put the Patriots ahead in the 73rd minute with his 13th goal of the year on an assist from Rubem Lima. UC outshot the Bulldogs, 16-14, including nine shots on frame.