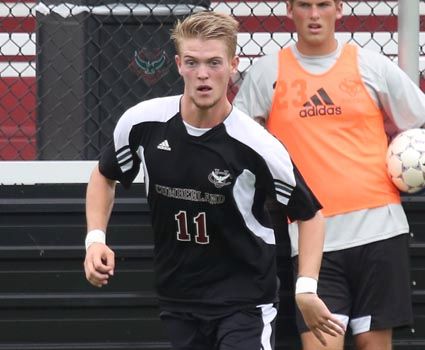 Josh Armstrong's free kick from 40 found the back of the net in the 80th minute in CU's 1-1 draw Thursday against Tennessee Wesleyan. (Credit Steve Wampler)
Tennessee Wesleyan at Cumberland Univ. | September 04, 2014

LEBANON, Tenn. – Josh Armstrong’s free kick from 40 yards found the back of the net for Cumberland in the 80th minute and neither team was able to score in extra time, as the Bulldogs and Tennessee Wesleyan battled to a 1-1 draw on a hot and humid Thursday afternoon at Lindsey Donnell Stadium-Kirk Field.

Tennessee Wesleyan (1-0-1) scored early in the match on a shot from 25 yards to the far post from Morgan Marsh, with Austin Kenney providing the assist in the 19th minute. TWC’s Nduka Kemjika had another chance just minutes later from a bad angle, but his shot hit the far post.

The visitors controlled much of the action in the opening 45 minutes, outshooting the Bulldogs, 12-1, but CU keeper Ian Hamilton made a pair of saves to keep the deficit at one.

Cumberland (0-2-1) was much more the aggressor after the break, keeping the ball and building the attack with much more consistency though without many good scoring chances. Marty Owens looked to tie the match early in the second half, putting home a ricocheted ball near the six-yard box, but he was called offsides.

Armstrong’s free kick with just over 10 minutes remaining knotted the score and Cumberland continued to attack, with its best opportunity coming midway through the first overtime period.

Freshman Brian McNamara’s chip from a bad angle to the far post was knocked away by a diving Bogachan Akyildiz and neither team was able to score in the last 15 minutes of play.

Hamilton finished with four saves and Akyildiz had five saves in the 110 minutes. Cumberland took 12 shots in the second half and extra time compared to 11 for TWC.

The Bulldogs play again Saturday at 11 a.m. at home against Missouri Baptist before playing two straight matches on the road beginning September 11 at Campbellsville University.