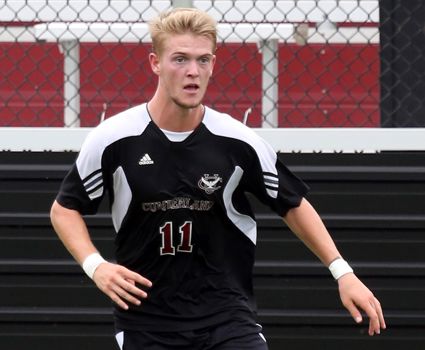 Josh Armstrong handed out a pair of assists for the second straight match in CU's 2-1 win at Union on Tuesday night. (Credit Steve Wampler)
Cumberland Univ. at Union Univ. | September 23, 2014

LEBANON, Tenn. – Patrick Carr and Marty Owens both scored and Josh Armstrong handed out a pair of assists, as Cumberland won its second straight overall with a 2-1 victory over Union University in men’s soccer action Tuesday night in Jackson, Tenn.

The Bulldogs (3-4-1) posted the win in a very physical match that featured 42 fouls and three yellow cards. The teams combined for just three total shots in the first half before play picked up after intermission.

Carr headed in a corner kick from Armstrong in the 50th minute, but Union squared the match just over two minutes later on a goal by Alex Pratt with an assist from Lucas Lopes. Owens provided the game-winner in the 73rd minute on a cross from Armstrong, his fourth assist of the season, all in the last two matches.

Owens has now provided the game-winner in all three of Cumberland’s victories this season. Ian Hamilton made four saves in net for CU, while Union (1-3-0) keeper Taylor Smith also had four saves.

Cumberland hosts St. Catharine College on Saturday at 2 p.m. and takes on the University of the Cumberlands at home on October 1 at 3 p.m.