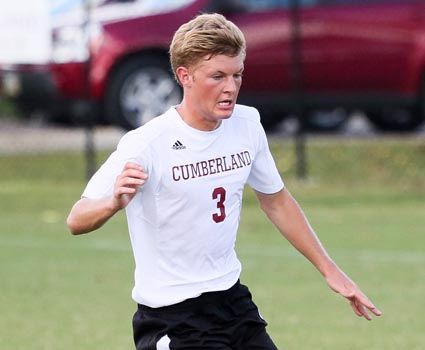 The Bulldogs (8-5-1) won for the sixth time in seven matches, scoring six times in the first 24 minutes to take control for the club’s second win in two days. Cumberland outshot Fisk, 36-8, and were it not for 14 saves for Fisk keeper Keemo Gardner, the score would have been much worse.

Armstrong assisted on the first two goals of the day, crossing to Alex Marr in the eighth minute and drilling a corner kick for a header by Sheen a little less than two minutes later. Armstrong scored his fifth goals of the year on assists from Pierce and Marty Owens in the 12th minute for a 3-0 advantage.

Owens added to his team-leading goals total with his eighth in the 20th minute on an assist from Tom Reilly and Sheen netted his second penalty kick in as many days less than two minutes later. Cody Johnson finished the first-half barrage from the Bulldogs in the 24th minute on Armstrong’s third assist of the match.

Fisk’s Shornell Thomas scored unassisted in the 59th minute for the visitors, but Pierce tallied a pair of unassisted goals in the 81st and 88th minutes, his first two of the season, to finish off the victory.