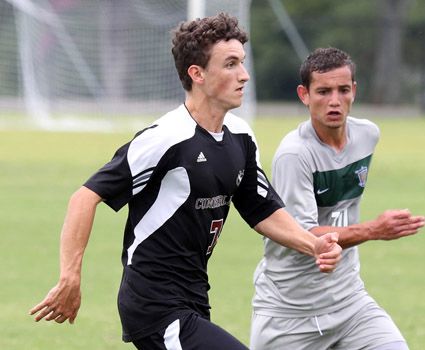 LEBANON, Tenn. – Cumberland’s Marty Owens scored in the first four minutes for an early lead, but West Alabama equalized just before the half and then poured on the offense in the second half, posting a 7-1 victory over the Bulldogs in men’s soccer action Sunday in Livingston, Ala.

The Bulldogs (9-6-1) lost for just the second time since September 16 to NCAA Division II West Alabama and the score could have been worse if not for nine saves from CU keeper Ian Hamilton.

Owens’ high-arching shot from the right side sailed over the head of UWA’s Lavares Stone thanks to an assist from Sella Gannot in the fourth minute and the Bulldogs controlled play for a majority of the half, but the Tigers’ Jason Boxx tied the match at one in the 42nd minute off a ricochet in the box.

West Alabama (9-6-0) scored again just after the break, with Evan Beutler netting his fourth goal of the season on an assist from Boxx, who also assisted on Liam Ireland’s goal in the 61st minute for a 3-1 UWA advantage.

The Tigers posted four goals in the final 14 minutes of the match, including scores from Patrick Carroll, Jacaob Ramsey, Thibault Charmey and Matthew Pemberton.

Cumberland finishes the regular season November 4 at Ohio Christian University before hosting a quarterfinal match in the Mid-South Championships on Nov. 8.