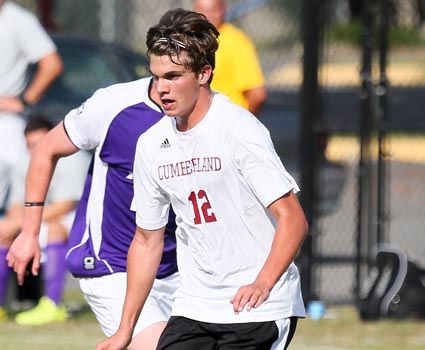 LEBANON, Tenn. – Alex Marr posted a hat trick and Josh Armstrong handed out four assists, as Cumberland completely dominated the University of Pikeville in an 8-0 win here Friday in the quarterfinals of the Mid-South Conference Men’s Soccer Championships at Lindsey Donnell Stadium-Kirk Field.

The Bulldogs (11-6-1) advance to the tournament semifinals on Thursday, November 13 to face the winner of Saturday’s Shawnee State at St. Catharine College match.

Cumberland started quickly, scoring twice in the first five minutes and five times in the opening half.

Armstrong and McNamara each headed passes and Marr finished for the goal just 2:04 into the match before Armstrong played a long pass down the leftside to McNamara in the fifth minute, with the freshman chipping over a hard-charging keeper and into the net for a 2-0 lead.

The Bulldogs kept up the pressure almost the entire match, though Pikeville’s best scoring opportunity came in the 13th minute off a corner kick, with Exon Menjivar’s point-blank shot saved by Ian Hamilton.

Cumberland scored three times in a 10-minute stretch later in the first half to essentially put the victory away.

McNamara controlled a long pass from the back and slid the ball to Marr, who slotted the goal low and right past Pikeville’s Tait Torstenson for the goal in the 23rd minute. Freshman Jeffrey Vaina headed in a corner kick from Marty Owens at the front post in the 29th minute and Armstrong’s pass from the end line to the top of the box found the foot of Tom Reilly in the 33rd minute, with Reilly drilling a shot into the upper 90 for a 5-0 advantage.

Marr posted the hat trick just six minutes into the second half on another beautiful pass from Armstrong, with Marr flicking past a helpless Torstenson and into the net for his seventh goal of the year.

Chuka Aruh, playing in his first match since September 27, dribbled down the right side near the six-yard box and crossed back to the middle for Bruno Brito Cunha, who fired into a wide-open net in the 62nd minute for CU.

Aruh was then tackled in the box in the 88th minute and buried the resulting penalty kick for his third goal of the year and the final tally of the match.