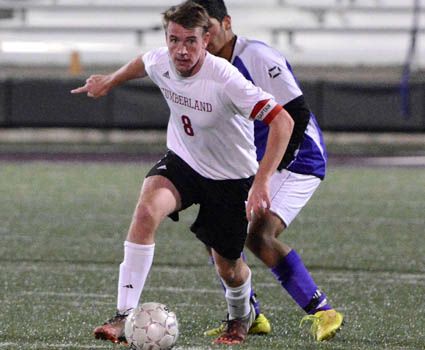 CAMPBELLSVILLE, Ky. – St. Catharine College scored twice in the first six minutes of the match and held on from there, defeating Cumberland, 2-1, in the semifinals of the Mid-South Conference Men’s Soccer Championships here Thursday at Finley Stadium.

The season ends for the Bulldogs (11-7-1), who got off to a miserable start but then controlled the run of the play for most the last 75 minutes of the match. CU outshot the Patriots, 11-6, in the match and nearly equalized with an own goal in the 74th minute, but the SCC backline did just enough, keeping shots from close range to a minimum.

The Patriots (15-5-0) started quickly, with Ashley Woods streaking down the leftside and blasting a shot that drilled the far post and bounced straight out in the opening seconds. The rebound from near the top of the box hit the arm of a Cumberland defender, resulting in a penalty kick, which Woods buried just 28 seconds into the match for a 1-0 SCC advantage.

St. Catharine kept up the intensity through the first 10 minutes and added a second goal in the sixth minute, with Bradley Nelson going 1-v-1 and slotting a shot low and right past CU keeper Ian Hamilton for a 2-0 lead.

The Bulldogs finally calmed down after the opening goals and had the run of play for most of the final 30 minutes, though the squad created few good scoring chances. CU finally broke through in the 37th minute, with Sam Sheen heading in a corner kick from Josh Armstrong. Sheen’s header went far post for his seventh goal of the year, cutting the deficit in half at intermission.

Cumberland had possession for almost the entire second half, with St. Catharine taking just one shot off a corner kick in the 61st minute. The Bulldogs had five shots in the period, with SCC keeper CJ Powell making a save on Chuka Aruh from near the penalty spot.

The Patriots nearly tied the match for Cumberland, with Harry Kirwan back-passing to Powell near the top of the box in the 74th minute, but Powell had already lunged for the ball and it rolled toward the goal line. Kirwan barely cleared the ball before it crossed the line and the Bulldogs gave away the ensuing corner kick.