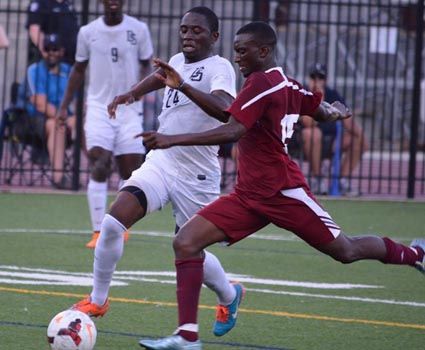 LEBANON, Tenn. – Sella Gannot scored a goal and assisted on another while Josh Armstrong handed out a pair of assists in Cumberland’s 4-2 victory over Dalton State College in men’s soccer action Friday night in Dalton, Ga.

All six goals in the match were scored in the second half, with Elliot Goodwin’s unassisted goal in the 56th minute breaking the ice on the scoreboard. The Roadrunners knotted the match at one just five minutes later when Ramiro Guerrero assisted on Tomide Adabale’s score.

Armstrong’s first assist of the match came in the 70th minute to Brian McNamara and he assisted again in the 80th minute to Gannot, giving CU a 3-1 advantage. Dalton State (2-1-1) closed the gap on Adabale’s second goal of the evening with exactly seven minutes to play, but Alex Marr’s goal with just 11 seconds remaining on an assist from Gannot put the match away for the Bulldogs (1-0-0).

Freshman Bennet Strutz made six saves in goal for Cumberland, all in the first half, to post the victory, while DSC’s Christopher Curran collected two saves. CU was outshot, 15-8, by the Roadrunners.

The Bulldogs play at Milligan College this Wednesday at 5 p.m. Central Time and head to Tennessee Wesleyan on September 5 before opening the home schedule against Bryan College on Tuesday, Sept. 8 at Lindsey Donnell Stadium-Kirk Field.