McNamara scores once, assists on another in 4-3 win 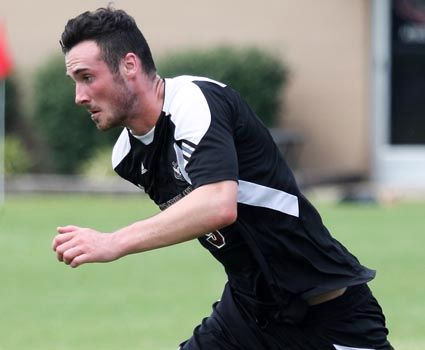 LEBANON, Tenn. – Brian McNamara scored a goal and assisted on another and Cumberland held off a late charge from the home team in a 4-3 men’s soccer victory over Milligan College in Johnson City, Tenn., on Wednesday evening.

The Bulldogs (2-0-0) continue their road swing to begin the season on Saturday at Tennessee Wesleyan at 1 p.m. Central Time before opening the home slate on September 8 versus Bryan College.

McNamara scored off a turnover in the fourth minute and the Bulldogs got an own goal after a cross bounced off Milligan’s Harrison Genseal in the 17th minute for a 2-0 CU advantage. But the Buffs (0-5-0) quickly knotted the match thanks to a goal from Zana Ali on a rebound in the 18th minute and then an unassisted score by Tapiwa Kaseke at the 20-minute mark.

Elliot Goodwin’s goal just before the half with an assist from Tom Reilly gave Cumberland a 3-2 edge at the break.

Alex Marr added the final goal for the Bulldogs in the 72nd minute with assists from McNamara and Sella Gannot, though again Milligan responded. Ali assisted on Jonathan Colson’s goal in the 85th minute, but that was the final shot for the Buffs in the match.

Bennet Strutz collected eight saves in net for CU while facing 15 total shots, while Brandon May and Nick Smith combined for five saves for Milligan.