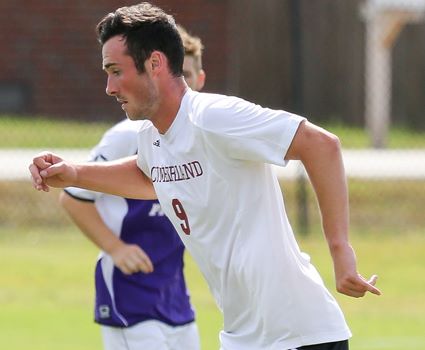 LEBANON, Tenn. – Brian McNamara’s header off a long free kick from Tom Reilly in the 83rd minute proved to be the difference, as Cumberland moved to 7-0-0 on the season with a 1-0 victory over Division II West Alabama here Sunday in men’s soccer action at Lindsey Donnell Stadium-Kirk Field.

The Bulldogs and Tigers (1-4-1) were scoreless into the final 10 minutes, though Cumberland was the more dangerous team offensively, taking possession into the final third, though without many quality scoring opportunities.

Chuka Aruh’s shot from the top of the box just before the half was saved by a beautiful diving stop from UWA’s Joshua Bramwell and was the most dangerous scoring chance for either club in the opening half.

West Alabama controlled the run of play for the first 10 minutes of the second period and continually cut off passing lanes the entire match, not allowing CU to connect the midfield to forwards McNamara and Aruh. The Bulldogs also had several chances down the right side in the second half, but potential crosses from Elliot Goodwin were blocked away as well.

The home team finally broke through in the final 10 minutes, with Reilly taking a free kick about two steps inside midfield. McNamara lined up the free kick for a header, beating Bramwell at the near post with 7:18 remaining on the clock. The Bulldogs played keep-away over the final minutes to preserve the undefeated start.

Cumberland begins Mid-South Conference action next weekend at Georgetown College on Saturday at 2 p.m. Central Time before hosting the University of Pikeville on September 30 and Lindsey Wilson on October 3 at Lindsey Donnell Stadium-Kirk Field.