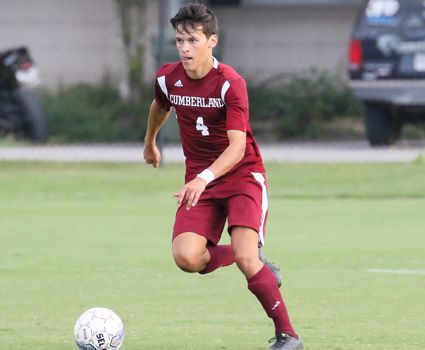 Markus Skraastad netted his third goal of the year for the game-winner in CU's 2-0 victory Sunday versus the University of the Cumberlands. (Credit Steve Wampler)

LEBANON, Tenn. – Markus Skraastad netted a goal in the 33rd minute and Marty Owens added a score in the 73rd minute in a 2-0 Cumberland victory over the University of the Cumberlands in men’s soccer action Sunday in Barbourville, Ky.

The match was rescheduled for Sunday and moved to Union College because of poor field conditions at the University of the Cumberlands.

The Bulldogs (12-0-0, 4-0-0 Mid-South) outshot the Patriots, 15-4, in the match, including 10 shots on goal, but it wasn’t until Skraastad’s third goal of the year late in the first half that the visitors took the lead.

Brian McNamara assisted on Owens’ score in the second half, the fifth goal of the year for the CU captain.

Bennet Strutz recorded his third shutout of the year in goal for Cumberland, collecting two saves, while Ahmed Ghatwary kept the Patriots (7-5-1, 1-3-0) in the match with eight saves.

The Bulldogs host St. Catharine College on Friday at 2 p.m. in their only match this coming week.