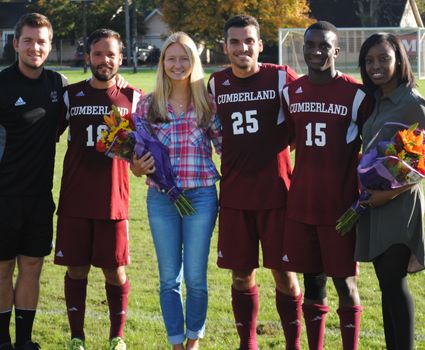 The Bulldogs (16-1-0) scored five times in the final 20 minutes of the first half to take a commanding lead and never looked back.

Goodwin netted his seventh and eighth goals of the year and assisted on goals by Aruh and Josh Armstrong at the end of the opening period. Aruh added his eighth and ninth goals of the season and Sella Gannot posted a goal and two assists as well for CU.

Ohio Christian’s goal came with 1:01 remaining in the contest when Ethan Duncan was tackled in the box by goalkeeper Matt Yarbro. Jon-Eric Stiles converted the PK for the Trailblazers (8-10-0).

Cumberland was relentless in the first half, outshooting the Trailblazers, 25-3, and taking 11 corner kicks. The constant pressure finally paid off in the 13th minute when Brian McNamara played a nice pass down the right side to Alex Marr, who crossed to the top of the six for an easy chip-in for Goodwin and a 1-0 advantage.

The Bulldogs scored five times in the last 20 minutes of the first half to take a 6-0 lead to intermission.

After a scramble in front of the goal, Josh Armstrong’s pass to the right of goal was booted in by Gannot to the far post, past OCU’s Roberto Valero, in the 27th minute. Gannot crossed to the middle for a 10-yard shot by Goodwin into the back of the net in the 33rd minute and Aruh got the first of his two scores at the 38-minute mark, taking a deflection at the top of the six-yard box and firing past Valero.

Gannot assisted on Aruh’s second goal in the 41st minute, this one a hard shot from the right to the far post, and Kurt Pierce passed down the left sideline to Goodwin, whose cross found Armstrong at the top of the six for the final goal of the half in the 43rd minute.

Senior Bruno Cunha, one of three seniors honored before the match along with Jose Retana and Rodrick Zacharias, picked off a pass outside the 18 and chipped over Valero just after the half. In the 64th minute Aruh crossed from the right and Cody Johnson gathered the loose ball, keeping his composure before firing top-shelf for his first goal of the year and the final tally for the Bulldogs.