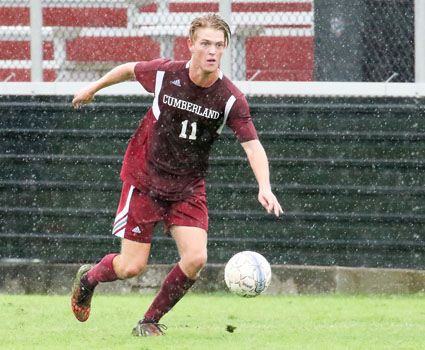 Josh Armstrong netted his eighth goal of the year for the first goal of the match in CU's 2-1 win Friday over Lindsey Wilson. (Credit Steve Wampler)
#20 Lindsey Wilson at #14 Cumberland Univ. | November 06, 2015

BOWLING GREEN, Ky. – Josh Armstrong and Brian McNamara scored in the first eight minutes of the second half and 14th-ranked Cumberland held on for a 2-1 victory No. 20 Lindsey Wilson in the semifinals of the Mid-South Conference Men’s Soccer Championships here Friday night at Lovers Lane.

The Bulldogs (18-1-0) advance to the November 13 championship match at Noon here in Bowling Green against ninth-ranked Campbellsville University. The Tigers gave CU its only loss of the season on October 30 in Lebanon.

McNamara was fouled just outside the box on the rightside in the 51st minute. Armstrong’s free kick from there found the back of the net at the 50:08 mark, his eighth of the season. Three minutes later Elliot Goodwin passed down the left sideline to Valentine Murombo, who crossed just before the ball went across the endline. The pass got by LWC goalkeeper Yuta Nomura and McNamara finished into the empty net at the back post, his team-leading 14th of the year.

Lindsey Wilson answered quickly, with Anthony Tshimpi crossing from wide left to the front post where Aleksi Pahkalaso finished for his 24th goal of the season. Pahkalaso nearly scored from distance in the 65th minute and the Blue Raiders continued to press, but the Bulldog defense did not allow any good scoring chances over the final half hour.

Cumberland was aggressive and controlled the run of play for the first 20 minutes of the opening period, with shots from Marty Owens and McNamara just missing and several other dangerous crosses by the Bulldogs cut off by Nomura.

The Blue Raiders took control of possession and found more space in the CU defense over the last 25 minutes, with Pahkalaso and Tuaun Salgado making runs down the middle along with sub Franco Roman. Pahkalaso nearly put Lindsey Wilson ahead in the final five minutes, but his shot from point-blank range was headed out of the goal by Rodrick Zacharias, who was standing in the net when the shot was taken. Another cross just before intermission went all the way across the goal, with Sondre Risa heading it away before three LWC attackers could find their way to it.