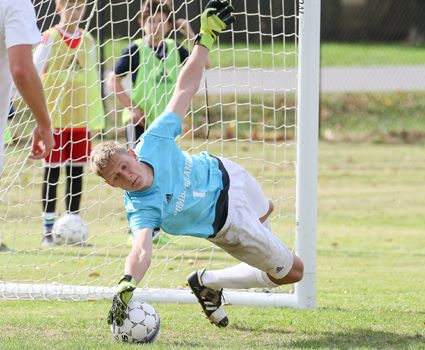 LEBANON, Tenn. – Jake Van Der Luit’s goal from 12 yards to the right of the goal in the 102nd minute propelled 18th-ranked Southeastern University to a 1-0 victory over No. 11 Cumberland in the NAIA Championship Men’s Soccer Opening Round here Saturday at Lindsey Donnell Stadium-Kirk Field.

Cumberland ends its season 18-2-1 overall, the most victories in program history, and CU claimed its first-ever Mid-South Conference Tournament championship, but the Bulldogs will have an empty feeling after losing in the program’s first trip to the national tournament.

The home team started slowly but outplayed the Fire (16-4-0) for almost the entire second half and the first overtime. SEU goalkeeper Jorge Navarrete kept his team in the match with several tremendous saves and seven in total. The Bulldogs outshot the Fire, 19-11, in the match, including 9-2 in the second half.

In fairness, Southeastern could have easily been ahead 2-0 in the first 15 minutes of the match were it not for two outstanding saves from CU’s Bennet Strutz, who turned back Gerritson Craane’s free kick from just outside the top right corner of the box in the 11th minute and Van Der Luit’s point-blank chance two minutes later. Van Der Luit also missed a breakaway opportunity early in the second half, SEU’s last real scoring chance until the second overtime.

Cumberland had a bad giveaway just outside the box in the second OT and Luke Marchesani picked up the ball for Southeastern at the top of the box on the left side. He dribbled to his right, passed to Van Der Luit, who dribbled twice before taking a low shot that grazed the hands of Strutz on its way into the back of the net, the eighth goal of the year for the freshman from Chicago.

The Fire had two excellent scoring chances in the first 20 minutes, but Strutz was up to the challenge.

Craane’s shot bounced across the entire width of the goal, over a pair of SEU players’ attempts to redirect the ball. Strutz’s diving stop at the back post kept the ball out of the net in the 11th minute.

Cumberland gave the ball away just over two minutes later and Van Der Luit’s blast from just inside the box was saved by another diving stop from Strutz.

CU finally gained control of possession in the second part of the opening 45 minutes, with shots from Marty Owens and Elliot Goodwin sailing high. Josh Armstrong’s free kick down the right side in the 33rd minute was saved by Navarrete and the SEU keeper made a diving stop on a header by Sondre Risa as well.

Cumberland’s best buildup of the match came in the 37th minute when Goodwin crossed to the middle but Brian McNamara’s redirect sailed just high and the teams went to the half with no score. CU led in shots, 9-6.

Owens had two good attempts and Gannot one in the opening minutes of the second half. Cumberland controlled the run of the play for pretty much the entire 45 minutes, but Southeastern did an excellent job of cutting off passing lanes in the final third and cutting off CU from any great scoring chances in the second half and the first overtime.