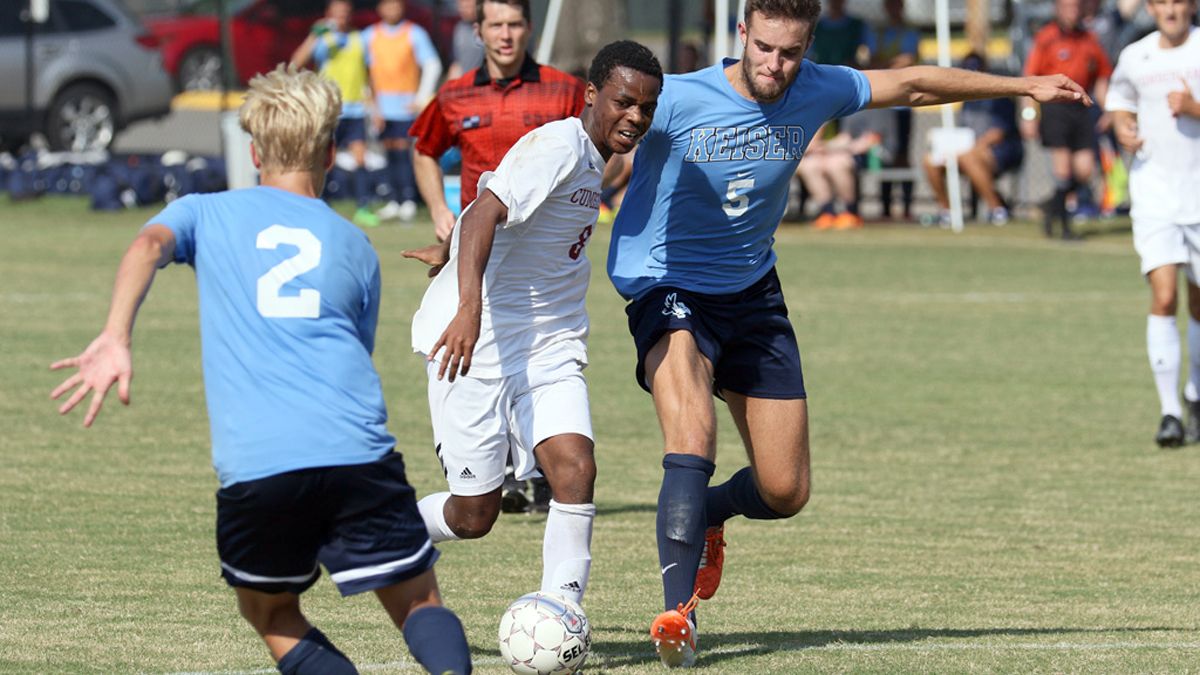 LEBANON, Tenn. – Valentine Murombo picked up a deflection in the box and buried it 41 seconds into overtime, giving 19th-ranked Cumberland a 3-2 victory over Keiser University in men’s soccer here Monday afternoon at Lindsey Donnell Stadium-Kirk Field.

Cumberland led 1-0 and 2-1, but Reece Weldon tied the match twice for the Seahawks, converting a penalty kick in the 53rd minute and drilling a free kick from 35 yards in the 76th minute.

Neither team was able to find the back of the net in the final 14 minutes, but the Phoenix (3-1-0) started quickly in the extra period. Elliot Goodwin dribbled down the right side and crossed into the box. The ball deflected off a Keiser defender and Murombo was right there to pick it up, hammering home a one-timer in the top of the net.

Cumberland held a 1-0 advantage at intermission after a beautiful goal in the 17th minute, with Marty Owens playing outside the Josh Armstrong, who crossed the Brian McNamara for a header to the far post into the net.

The Seahawks quickly equalized after the break, with Ben Frogner drawing a foul in the box and Weldon converting the PK past Strutz.

The action was up-and-down for just about the entire 90 minutes, with Keiser holding possession for a good majority of the second period, but CU retook the lead off a corner kick.

Armstrong’s corner was deflected by Goodwin and headed toward the far post on the ground, where Tom Reilly tapped in the goal in the 73rd minute. Weldon again answered for the Seahawks, taking a free kick from 35 yards out down the left side, with the shot bouncing over the outstretched arms of Strutz and just inside the near post only three minutes later. That set-up Murombo’s game-winner less than a minute into overtime.

Cumberland hosts Tennessee Wesleyan this Saturday at 2 p.m., ending a stretch of four home matches in five outings to start the season for the Phoenix.