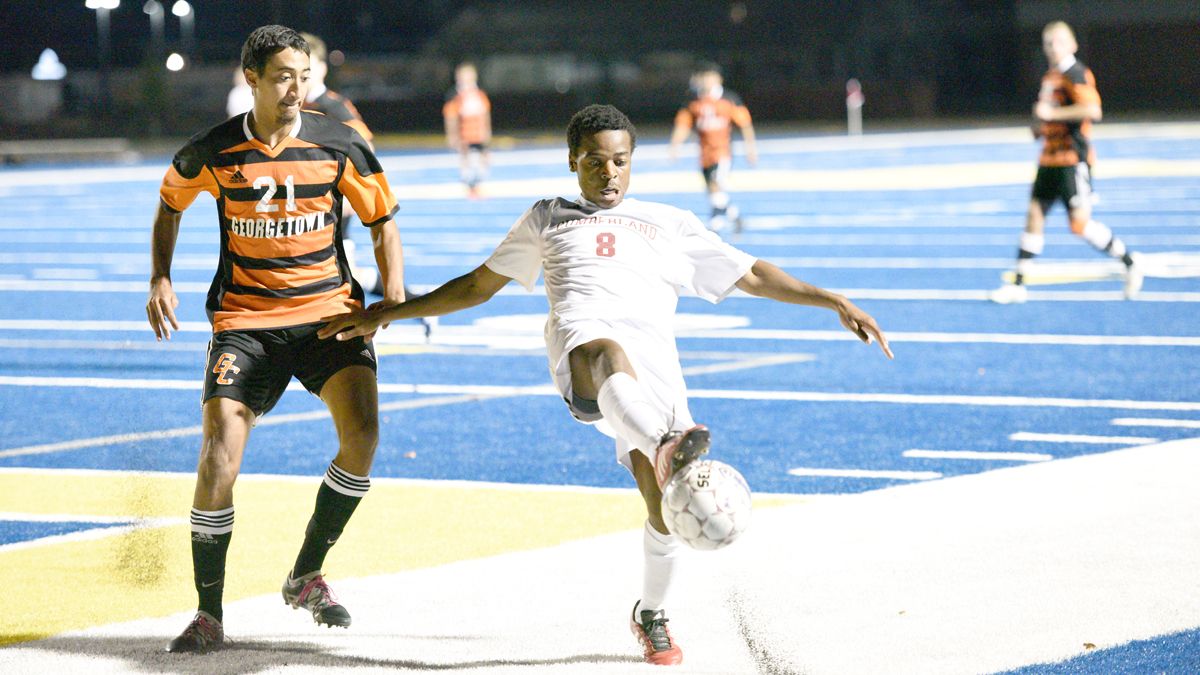 Valentine Murombo battles for a ball in CU's 5-0 victory versus Georgetown on Friday. The senior drew a foul that earned a penalty kick and put CU ahead 1-0 in the first half. (Credit Chris Wells)
Georgetown College at Cumberland Univ. | November 04, 2016

Cumberland advances to next Thursday’s semifinals to take on sixth-ranked Campbellsville University at 7:30 p.m. in Bowling Green.

The Phoenix outshot the Tigers, 19-3, including 10-3 in the first half, and Georgetown did not have a shot on goal for the entire 90 minutes.

Valentine Murombo was pulled down near the endline in the 19th minute and Brian McNamara converted the penalty kick for his 10th goal of the season and a 1-0 CU lead.

The Phoenix took a 2-0 edge in the 29th minute when Markus Skraastad dribbled around three Georgetown defenders and his strike from 20 yards sneaked inside the near post for his first goal of the year.

Cumberland added another score just before the half, with Dylan Schwartz lofting a header to the far post, over the head of Georgetown goalkeeper Matthew Oster, off a corner kick from Alex Marr in the 37th minute. CU took the 3-0 advantage to intermission, controlling the run of play for pretty much the entire 45 minutes.

Not much changed in the second half from a possession standpoint and the Phoenix broke through in the 65th minute, with Sondre Risa scoring his goal of the year, tapping in a corner kick at the far post from Marty Owens. It marked the first playing time for Risa since October 5 at Lindenwood-Belleville.

In the 87th minute Patrick Hay booted in his second goal of the year at the end of a scramble near the six-yard box.