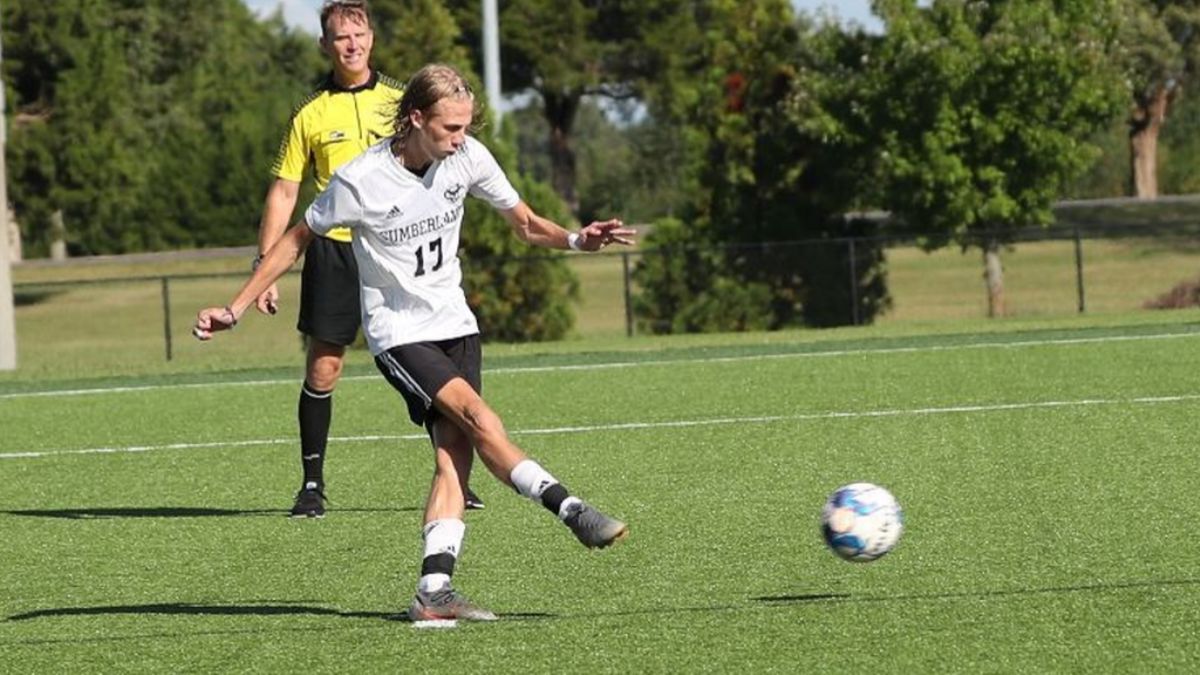 Kam Stanley netted the game-winner on a penalty kick in the upset win over No. 12 Cumberlands. (Credit: Bob Tamboli)
Cumberlands at Cumberland | September 21, 2021

MURFREESBORO, Tenn.--Cumberland men's soccer tops No. 12 the University of the Cumberlands in a 3-2 battle in the rain at Richard Siegel Soccer Complex on Tuesday afternoon.

Cumberland conceded the first goal of the match in the opening minutes as Joachim Blomsterg made a long pass to Shuma Sasaki and Sasaki blasted it from 40-yards out off the left post and in the goal to give the Patriots a 1-0 lead after two minutes of play.

The Phoenix would tie it nine minutes later after a shot ricocheted off a Cumberlands defender over the goal line for a corner kick. Martin Walsh's corner went toward the near post and Joaquin Carillo got enough on it to pass it to Austin Morenzoni at the back post for a one-timer goal to tie it.

In the 19th minute, Kam Stanley was loose at the post and fired a shot that the Cumberlands keeper Ingram Struck saved. Stanley collected the rebound and took another shot, but Struck was there for another stop.

Tyler Watson checked in and immediately made an impact. He was able to get spacing and take a shot that hit off the crossbar and the Patriots cleared away. Both teams would keep the score at 1-1 headed into the intermission.

In the 51st minute, the Phoenix played a ball up to Stanley in front of the box. Struck charged outside of the box and struck Stanley who won the 50/50 ball drawing a red card on the Patriots keeper forcing them into a new goalie and to play a man down the rest of the match.

New keeper Nathan Hart came in and was tested very quickly as the Patriots were called for a handball in the box one minute later. Stanley took the penalty kick and drilled it to give Cumberland a 2-1 lead.

Cumberland would extend the lead on a free-kick that Thomas Groenhilder passed to Edvin Grevskott outside the box. Grevskott dished it to Nawn Thang in front of the goal and he slotted it past Hart for a 3-1 Phoenix lead with just over 10 minutes to play.

The Patriots would get one goal back two minutes after as they played it from one corner to the next and found Storm Hollensted for the goal. The Patriots would fire off one last shot as time expired, but keeper Nicklas Rulle made the stop for the Cumberland upset.

The Phoenix will take on Life University at home on Saturday at 3:00 p.m.