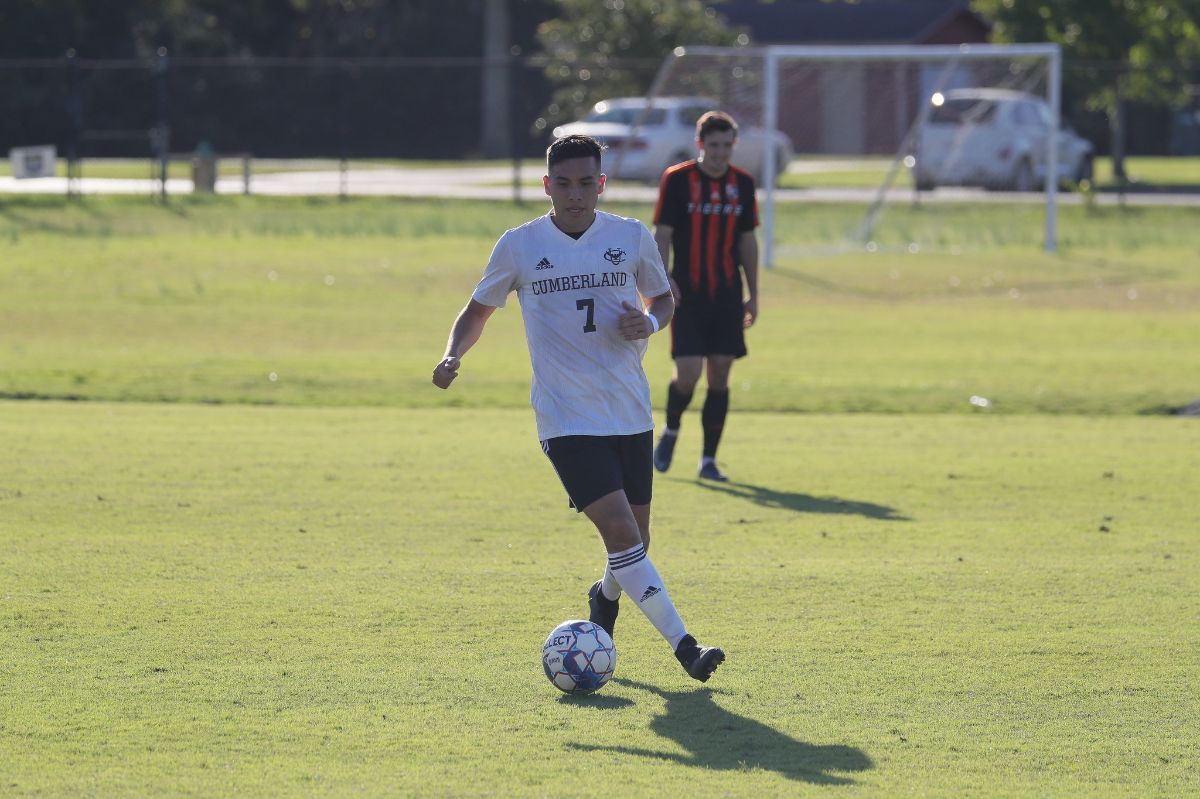 Brandon Gonzalez had the lone goal for the Phoenix in the 75th minute (Credit: Steve Wampler).
Cumberlands at Cumberland | November 10, 2021

BOWLING GREEN, Ky.--Cumberland men's soccer (13-4-1, 8-2-1 MSC) falls 3-1 to the RV Cumberlands Patriots in the Mid-South Conference Semifinals. The Phoenix gave up three unanswered goals in the last 15 minutes of the game.

The last time these two teams met was Sep. 21st in Murfreesboro, Tenn., after the game moved from Lebanon due to weather. The Phoenix defeated the then 12th ranked Patriots 3-2 with goals from Austin Morenzoni, Kam Stanley, and Nawn Thang.T

This match was very even in the first half as both teams had similar possession times. Both teams also had the same number of shots and shots on goal with 5 and 2, respectively.

However, the best chance to score in the first half came from the Patriots. Cumberlands Rodrigos Riveros put a header off the crossbar and out with 8:36 to play.

The Patriots had another excellent chance to score two minutes into the second half from the leg of Riveros on a crosser that went off the crossbar.

The Phoenix were the team to break the scoreless tie in the 65th minute. Austin Morenzoni passed the ball up to Tyler Watson, who found Brandon Gonzalez on a beautiful cross to give Cumberland the 1-0 advantage.

Just over 11 minutes later, the Patriots evened the score on a shot from Stephen Appiah assisted by Liam Healey.

Cumberland had another excellent opportunity to score six minutes later off a header from Retsin Kabambala that went just over the crossbar.

The Patriots took a 2-1 lead in the 83rd minute after a pass to the right side post from Joel Drewery found the leg of Stephen Appiah for the go-ahead goal.

Just one minute later, Cumberlands scored again, this time on a shot from Ricardo Lopes de Matos assisted by Shuma Sasaki.
The Patriots held on for the last six minutes of the match to win 3-1.

Statistically, the Phoenix took 15 shots with five on goal compared to the Patriots 14 and seven on goal. Brandon Gonzalez made the biggest impact in the game offensively for the Phoenix as he registered six shots with four on net and the team's lone goal.

With the loss, Cumberland awaits an at-large bid in the NAIA Men's Soccer National Tournament. The selection show happens on Sunday after all of the conference tournaments have wrapped up.