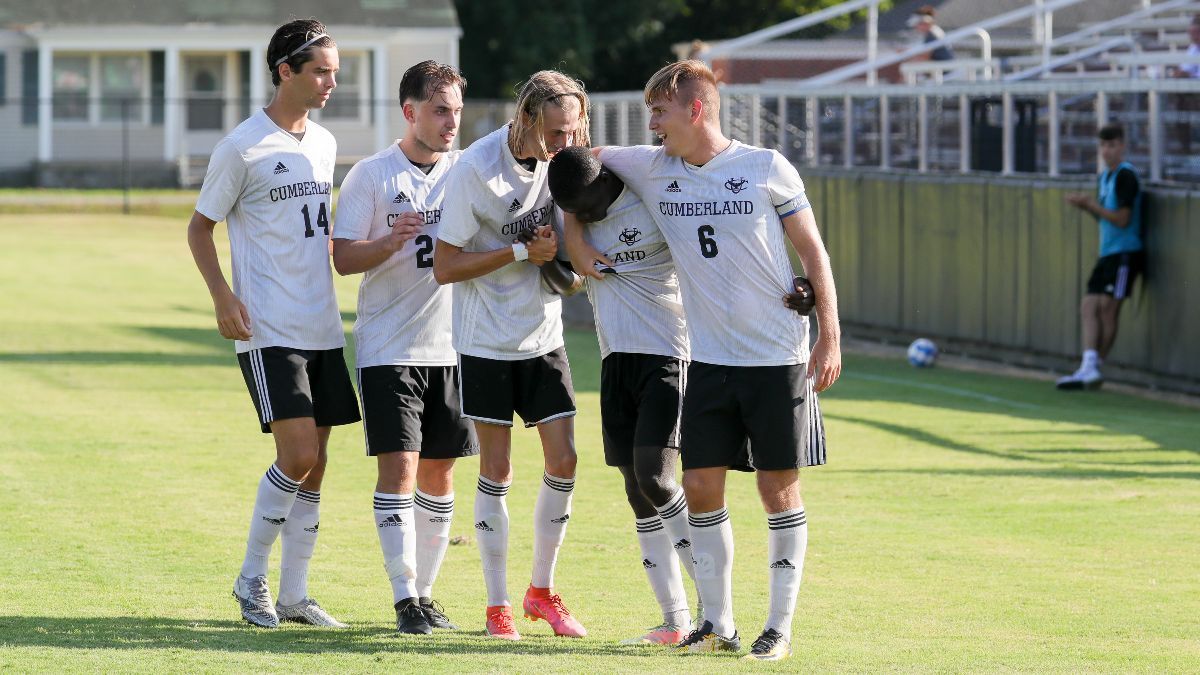 Team celebrated after the fourth goal of the match by Brima Kamara. (Credit: Steve Wampler)
Union at Cumberland | August 28, 2022

LEBANON, Tenn-- Four Cumberland players recorded their first goals of the season to lock in a win against Union College. Martin Walsh, Kam Stanley, Cathal Coyne, and Brima Kamara each contributed a goal in the 4-0 win giving head coach Shane Keely his first career win. Robbie Lyons led all players with two assists in the match.

Cumberland (1-1-0) held control of the ball for the majority of the first half, but Union packed the box making shot opportunities few and far in between for the Phoenix. The Bulldogs took four shot attempts compared to the Phoenix two. Union had their best chance of the game late in the half when a cross to Taylor Chapman in the middle of the box. Chapman had a wide open net as keeper Jacob Forster was crashing the cross, but the shot sailed over the crossbar for the 0-0 tie at the break.

After a scoreless first half, Martin Walsh took a beautiful high-corner shot finding the back of the net, catching goalkeeper Ethan Whyte off guard and putting the Phoenix on the board. Walsh was assisted by Robbie Lyons.

Cumberland dominated the rest of the half, riding the momentum and energy set by Walsh’s goal. Kam Stanley capitalized on a foul in Union’s box, securing his first goal of the season off of a penalty kick and extending the lead to 2-0 in the 56th minute.

Seven minutes later, Robbie Lyons placed a perfect ball off the corner kick to set up a header for Cathal Coyne, who secured goal number three for the Phoenix.

Brima Kamara finished the scoring off on a counter-attack with his first goal in a Cumberland uniform in the 72nd minute of the game, after a great set up from Kan Stanley and Edvin Grevskott.

The Phoenix held down the rest of the game to earn their first win of the season and Shane Keely’s first career win as head coach. "It feels great. It was a tough first half but the boys came out in the second half and made adjustments," Keely stated after the win.

The Bulldogs registered 20 fouls over both halves compared to the 11 from the Phoenix.

Cumberland will be back at home next Saturday, September 3rd to faceoff with IU East at 3 pm.