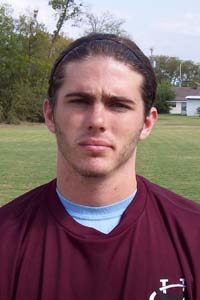 2010 (JUNIOR): Played in 12 matches, all off the bench, taking four shots … Recorded one shot versus Faulkner Univ. and at Freed-Hardeman and posted two shots against Brescia Univ.

2009 (SOPHOMORE): Named TranSouth Scholar-Athlete … Played in seven matches, collecting one shot at Martin Methodist … Also played in matches versus Emmanuel College, at Campbellsville Univ., versus Union Univ., at Mid-Continent, against Freed-Hardeman and versus Trevecca Nazarene in first round of TranSouth Championships.

2008 (FRESHMAN): Member of the team but did not play in any matches.