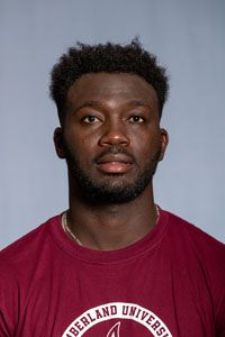 Herman Abban is entering his first year as a Graduate Assitant for the men's tennis team at Cumberland.

Before Cumberland, Abban attended the New Mexico Military Institute, his freshman and sophomore years before transferring to Carthage College, where he earned his bachelor's in Physical Education Sport and Fitness, in May 2019. At Carthage, Abban had a standout career as a player, compiling a 30-4 record at No. 1 singles in 2017. That season he was named an Intercollegiate Tennis Association All-American, as well as the College Conference of Illinois and Wisconsin “Men’s Tennis Player of the Year” and CCIW “Men’s Tennis Newcomer of the Year.” He was also an accomplished doubles player, where he and his partner went 34-4 and reached the national semifinals.

Abban, a native of Accra, Ghana, has extensive experience in coaching. At Carthage College, he was the team manager of the tennis team where he facilitated communication between his teammates and coaches. He was also a team captain on the Ghana Men's National Team at the African Junior Championship where he took the bronze. Abban also has a passion for community service. He spent 2 years helping the Children's Home in Winneba, Ghana. He is also fluent in three languages, which are French, Arabic, and English.