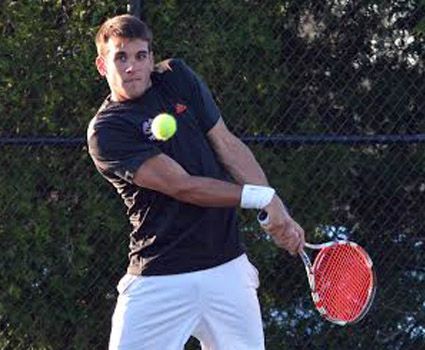 GEORGETOWN, Ky. – Antonio Manuel Marcelo and Pablo Borrero each posted victories in singles and doubles in sixth-ranked Cumberland’s 5-1 win over Campbellsville University in the semifinals of the Mid-South Conference Men’s Tennis Championships here Friday at the Lackey Tennis Center.

Cumberland (14-4) advances to face seventh-ranked Lindsey Wilson in the tournament finals on Saturday at 1 p.m. Central Time. The Bulldogs defeated the Blue Raiders, 5-4, on April 9 in Columbia, Ky. CU won its 13th straight match overall with Friday’s victory against Campbellsville.

Borrero and Andres Burgos helped the Bulldogs start quickly in doubles, breaking in the fourth game for a 3-1 advantage and then again in the 10th game en route to an 8-3 triumph at No. 2 over Noah Swencki and Alejandro Soriano, but the Tigers (14-8) came right back to even the doubles.

Johan Fuzellier and Parker Jones broke at 3-all at No. 3, though Cumberland’s Garry Tokas and Diogo Soares broke right back thanks to a double fault, but Campbellsville’s duo broke again at 4-all, also with the help of a double fault, and won the final four games and the aid of another break for an 8-4 victory.

Marcelo and Pedro Rodrigues jumped out early at No. 1 for the Bulldogs, breaking in the second game and taking a 3-0 advantage, but Sebastian Marot and Zach Baulch answered with their own break to pull within, 3-2. Cumberland broke again in the sixth game, though and led 6-3 before the Campbellsville pair put together three straight games, including a break in the 11th game, and evened the match at 6-all.

Rodrigues held serve for a 7-6 edge and the Bulldogs broke again in the final game, taking it 8-6 for a 2-1 lead in the match after doubles.

Marcelo’s match at No. 1 against Soriano finished off the victory. The CU junior broke serve in the first game and the last game of the match, winning 6-2, 6-2, to send Cumberland into the finals of the conference tournament for the second straight season since joining the league. The club lost 5-3 to Lindsey Wilson in last year’s championship match.

The Bulldogs were up a set in two of the other three matches on the court as well, with Rodrigues breaking in the final game of the first set against Fuzellier at No. 3, though Fuzellier was up a break at 3-4 in the second set when the match ended. Tokas had just won the first, 6-1, versus Eduardo Mendoza at No. 6 and Burgos and Baulch were 3-all at No. 5.