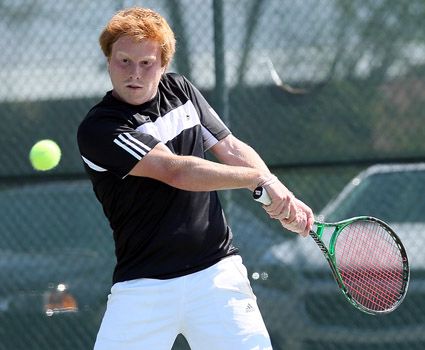 GEORGETOWN, Ky. – Antonio Manuel Marcelo and Pedro Rodrigues each posted singles victories in straight sets, but No. 7 Lindsey Wilson won No. 3 doubles and No. 4 singles in tiebreakers and Fabricio Morales served out the deciding match at No. 2 in LWC”s 5-3 victory over No. 6 Cumberland in the finals of the Mid-South Conference Championships here Saturday.

The Bulldogs (14-5) lost for the first time since March 11, ending a 13-match winning streak, and dropped the conference tournament championship match for the second straight year to the Blue Raiders (16-2). With its national ranking, Cumberland will receive an at-large bid into the NAIA National Championships set for May 13-17 in Mobile, Ala.

Cumberland jumped out quickly in doubles, with Pablo Borrero and Andres Burgos breaking on three straight LWC service games to take an 8-2 victory at No. 2 over Edberg Espinoza and Pablo Vilches, but the Blue Raiders answered at No. 1.

Marcelo and Rodrigues broke in the second game, only to have the ninth-ranked tandem of Morales and Francisco Charters get the break right back in the next game. Lindsey Wilson broke again at 5-all thanks to a pair of double faults by Rodrigues and served out the match for an 8-6 win.

That left everything to No. 3, which was a topsy-turvy match to say the least. It featured eight total breaks, four by each team, and saw several momentum shifts along the way.

Lindsey Wilson’s Raul Mendez and Ignacio Huertas broke twice in the first three games, but CU’s Garry Tokas and Diogo Soares answered with two breaks of their own, taking four straight games. The Blue Raiders came right back with a break at 4-all and then again at 4-6 and looked to serve out the match, but the Bulldogs battled back, breaking at 4-7.

Lindsey Wilson had another chance to serve for the match at 6-7, but CU won the first three points for Love-40, only to lose the next four, but Cumberland evened the match at seven with three consecutive points.

Both teams held serve, forcing a tiebreaker, which stayed even until a pair of overheads by Soares gave the Bulldogs a 5-3 edge, but the wind helped Lindsey Wilson take two straight points (which happened in all three matches on several occasions with balls dropping right at or on the baseline) and an excellent second serve by Mendez got another before Soares double faulted on match point for a 7-5 breaker for the Blue Raiders.

Rodrigues was the first off, breaking in the final game of the first set against Mendez and twice more in the first five games of the second set, taking a 6-4, 6-2, triumph at No. 3 and evening the match at 2-2.

Huertas helped the Blue Raiders regain the advantage, though not without some consternation at No. 6. He broke twice in the opening set versus Tokas and then again in the first three games of the second set, but Tokas pulled within 5-4 with his own break and looked to even the set with his serve. The final point of the match was an overhead for Tokas that sailed well long, giving Huertas a 6-3, 6-4, victory.

Marcelo and Espinoza, ranked 12th and 36th nationally, respectively, battled at No. 1, trading breaks in the third and fourth games of the first set before Marcelo broke again at 4-all and served out for the set. The second set followed much the same pattern, with only a break at 3-all, and the Bulldogs evened the match again with a 6-4, 6-3, win.

Soares and Charters, who played the deciding match at No. 4 in the team’s first meeting this season, followed the same pattern in both sets of Saturday’s outing. Soares got a break in the second game of the opening set but Charters evened the match in the sixth game and broke again in the eighth game thanks to another double fault from Soares.

Soares broke in the second game of the first set and led 3-0, but breaks by the Blue Raiders in the fifth and seventh games made it a 4-3 LWC edge. Cumberland broke right back and the two players held serve twice, forcing a tiebreaker. A series of shots long and wide helped Charters win four straight points and the final shot wide by Soares gave LWC a 6-3, 7-6 (4), victory and a 4-3 advantage in the match.

Morales and Borrero slugged it out on the baseline at No. 2, but Morales was a little better, especially in the first set when he broke twice in the first three games. The two players both held serve in the second set, though not without challenges from their opponent, until Morales broke through at 5-all. He then served out the victory for the Blue Raiders, who avenged the 5-4 loss to the Bulldogs earlier this month.

Cumberland’s Burgos claimed the first set at No. 5 against Vilches, 6-2, serving out the opening set in a game that featured at least 15 deuces. Burgos broke in the fifth and seventh games and looked to serve out the match, but Vilches battled back with a break and two holds of serve. The match was tied at 5-all in the second set when Morales won the deciding point for LWC.