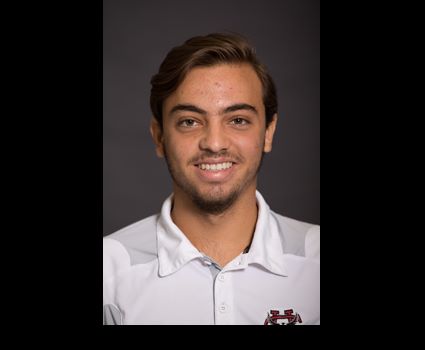 Axel Lucich was one of four Bulldog players to win in singles and all three doubles teams remain alive at the ITA Southeast Regional.
Related Links

LEBANON, Tenn. – Jakov Tshirkin, Thiago Lopes, Alejandro Rosas Garcia and Anatoily Lashkul each advanced to the Round of 32 in singles while all three Cumberland doubles tandems posted victories on Thursday at the ITA Southeast Regional in Georgetown, Ky.

Action continues in singles starting at 8:30 a.m. Eastern Time on Friday and doubles play begins at 11:30 a.m. Two singles and two doubles matches are scheduled for play on Friday.

Rosas Garcia collected a 6-2, 6-1, victory over University of Pikeville’s Fabian Fahrtman and faces Lindsey Wilson’s Denis Porcic in the Round of 32 on Friday. Senior Dylan Nelson won his opening match, 6-2, 6-2, versus Milligan College’s Josh Crain before dropping a 7-5, 6-4, decision to Indiana-Southeast’s Jonathan James in the Round of 64.

Tshirkin posted a 6-4, 6-4, win against Pikeville’s Juan Reyes and faces Martin Methodist’s Brad Prada on Friday morning, while Axel Lucich did not drop a game in his opening-round win over Georgetown College’s Kaushik Kailash but lost in a super tiebreaker to Asbury University’s Deuce Gibson in the Round of 64.

Lopes registered a 6-4, 6-3, victory versus Dan Cattani from the University of the Cumberlands and takes on Georgetown’s Tristan Nosek in the Round of 64. Lashkul followed the same pattern with a 6-1, 6-1, win over Asbury’s Seth Heines and faces Milligan’s Jackson Lenoir on Friday.

In doubles Nelson and Rosas Garcia defeated Cattani and Kenny Wilson from the University of the Cumberlands, 8-4, and plays Lindsey Wilson’s Porcic and Raul Mendez in the Round of 16.

Lashkul and Lopes won 8-1 versus Georgetown’s Nosek and Austin Colliver and faces Pikeville’s Diego Blanco and Eric Bernabeu on Friday, while Tsjirkin and Lucic posted an 8-3 victory against Brescia University’s Fernando Garcia and Turilo Duck and takes on Martin Methodist’s Raphael Monzione and Nicolas Galleguillo in the Round of 16.