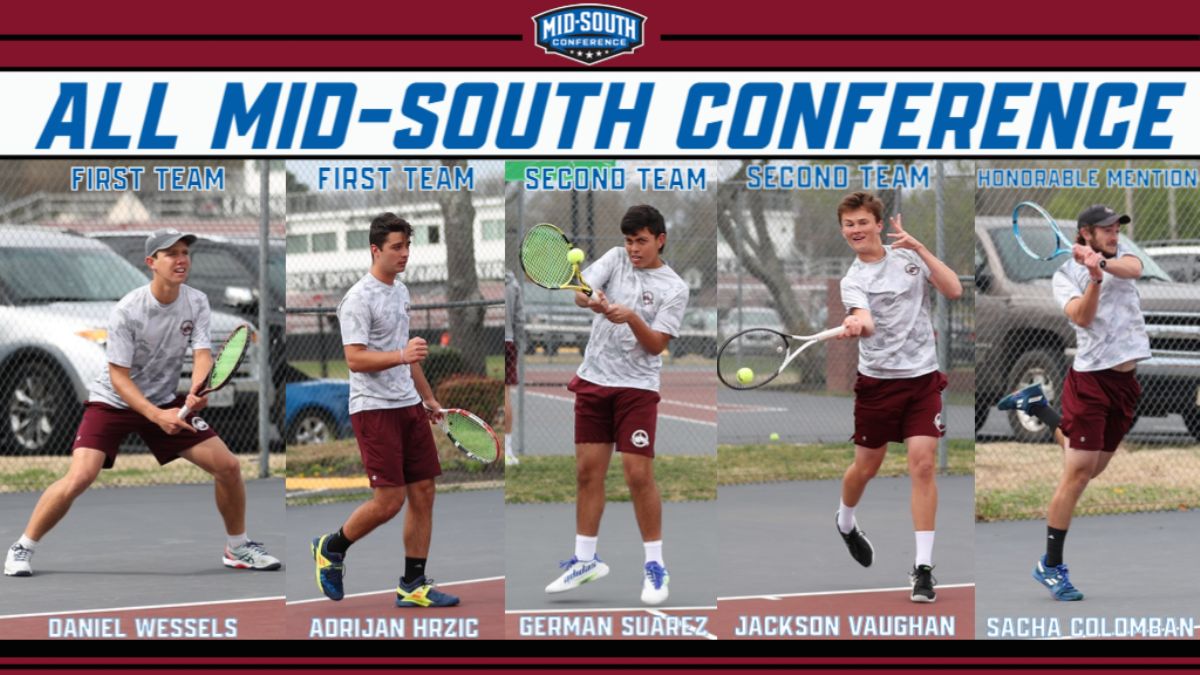 Daniel Wessels was named the Mid-South Conference Freshman of the Year for his play this season. He is the first Phoenix to win the award since 2012-13 when Pablo Borrero earned the honor. The Heidelburg, South Africa, native holds a 9-6 overall singles record this year, while going 5-1 at the No. 1 singles position. Wessels also holds a 13-3 record in doubles play on the year earning him a spot on the All-Mid-South Conference first team.

Also earning a spot on the All-Mid-South First Team was Adrijan Hrzic. The sophomore from Rukavac, Matulji, Croatia, compiled an 11-6 record in singles this year with a 5-3 record as the No. 1 and a 6-3 record in the No. 2 spot. He also went 6-2 in Mid-South play while carrying a 12-5 doubles record with Dan Slapnik Trost. This is Hrzic's second straight season being named First Team All-Conference.

German Suarez earns a spot on the All-Conference Second Team for the second straight year after posting a 7-7 overall record in singles this season and a 14-4 doubles record. The Popayan, Colombia, native posted a 6-2 conference doubles record and a 10-2 overall record on the No. 2 pairing with Daniel Wessels.

Sacha Colomban gets the nod as an All-Conference Honorable Mention for the first time in his career. The junior from Bryancon, Hautes-Alpes, France, put together the best overall singles record on the team at 15-3 and 8-2 in conference play. Colomban also went 2-2 in doubles play, going 2-1 as a member of the No. 1 doubles pairing with Hugues N'Goma.

Also earning a spot as an All-Conference Honorable Mention was Jackson Vaughan. The sophomore from Nolensville, Tenn., put together a 9-6 season overall along with a 6-1 conference record. Vaughan played his best tennis at the No. 5 singles spot with a 5-1 record on the year thus far to go along with a 7-8 doubles record.

Cumberland freshman Fernando Flores held the honor of being named to the 2021-22 Mid-South Conference Champions of Character team.

The conference also named Andres Padilla and Carlos Padilla the Mid-South Assistant Coach of the Year. The Padilla brothers have been integral to the success for the team as they joined the coaching ranks ahead of this season. Under them and Head Coach Thiago Lins the team ended the regular season with a 13-7 overall record and an 8-2 conference record while being currently ranked the No. 16 team in the NAIA.

Cumberland holds a first-round bye in the Mid-South Conference Tournament and is set to take on the winner of Shawnee State and Tennessee Southern in the Quarterfinals on Friday, April 22.