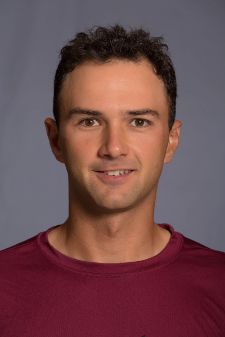 Coach Lins is entering his fifth year as the Head Men's Tennis coach at Cumberland. In his first season he led the men's program to a 13-7 overall record, Mid-South Conference Regular Season Champs and a trip to the National Tournament making the second round and finishing the season ranked top 16 in NAIA and Lins earned Coach of the Year awards by the conference.

In the 2019-2020 the season was shortened by Covid. His third season as a head coach in 2020-2021 was a very successful one achieving a 13-7 overall record, runner-up of the Mid-South Conference tournament as a team, having five student-athletes earning All Mid-South Conference, staying ranked top 20 NAIA as well as earning ITA Community service award by having a great impact to the community during the school year.

During all of his coaching years at CU, Coach Lins has led his teams to earn NAIA Scholar Team and ITA Scholar Team every season as well as maintaining an incredible high team GPA and being successful off the court helping out with the community.

He has played for 2 years at Seward County Community College in Liberal, KS and then transferred to Bethel University in Tennessee from 2005-2008.

As a college player, he was ranked in the top 20 in Singles and Doubles during his career and as a team they were ranked in the top 5 in the NAIA rankings and appeared in 3 straight national tournaments. After graduating college, Coach Lins worked at several tennis facilities, including Tennis Pro at Idle Hour Club in GA, Director of Tennis at The Westside Club in SC, Junior and Adult Tennis Coordinator at Midtown Athletic Club in GA, Head Tennis Pro for Genesis Health Clubs in Salina, KS, as well as the Student Assistant Men’s and Women’s Tennis Coach for Bethel University and assistant men's and women's coach at Central Christian College in Kansas.

He worked at several clinics as a special guest in Colombia, Brazil, Italy and around the US, working alongside legends of the game such as Rod Laver, John Newcombe, Roy Emerson, Mark Phillippoussis, Mark Woodforde, and several others players that were grand slam champions.

He holds USPTA, USPTR, and ITF certifications and has been teaching and coaching tennis for over 20 years.

Lins received his undergraduate degree in Physical Education from Bethel University in 2008. He has also finished his masters degree in Sports Management in December 2018 at Cumberland University. He resides in Lebanon,TN with his wife and 2 children.